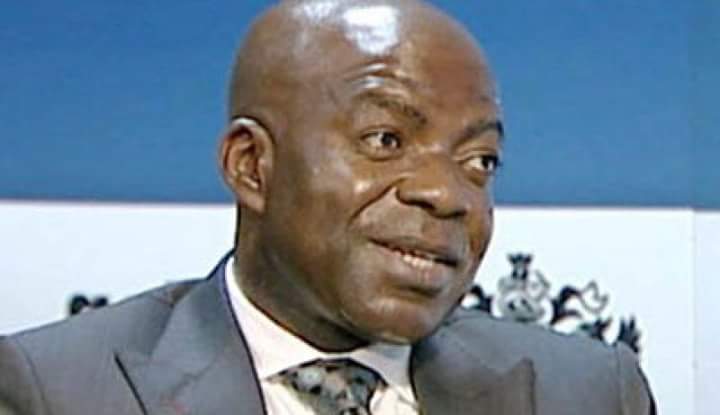 I am happy he was there.
1. For the first time he admitted his Arochukwu origin but claimed that zoning or charter of equity is a PDP thing only.

Now that Mazi Otti has publicly admitted his Arochukwu origin Abia voters should ask him why he chose his running mate from same Arochukwu/Ohafia federal constituency.

Factually, Abia Charter of Equity was endorsed by the founding fathers of the state before the state was created. I make bold to state that without the charter of equity there would have been no Abia State That Charter was the basis of agreement between the different state creation champions to accept to work together for the creation of the state.

If indeed PDP is respecting that charter and other parties in the state are not interested, all Abians should vote for PDP all the way.

2. He falsely claimed that Mbakwe built Golden Golden. Obviously he knows nothing about Abia State or our history. Golden Guinea, Modern Ceramics etc were built in the 60s by Dr M.I. Okpara.

Specifically, Golden Guinea started business in 1963 and at that time was called Independence Breweries Limited.

Otti is a “helicopter” politician and does not know Abia State.

3. Otti also claimed that Aba is a ghost town but I will leave that to those living and doing business there to respond to him. Suffice it to state that Aba’s resurgence under Ikpeazu is a well known fact.

According to Otti, he “visited” Aba 2 weeks ago.

You can now see for yourself; Otti visited Aba during the Christmas festivities and made up his mind that the city is a ghost town. I hope Aba people will remind him that we lock up shops during Yuletide celebrations and travel home to be with our people?

Otti has just confirmed that he is merely a visitor to Aba and Abia State, a State that he desperately wants to Govern.

Governor Ikpeazu is on ground at Aba and Abia State and knows the nooks and crannies of the state. That is why he is able to respond to challenges in the place with deep knowledge of the remote causes and challenges, and develop sustainable solutions to them.

4. Otti further claimed he has heard about Enyimba Economic City but believes the federal government was deceived into approving it close to elections.

Otti’s position confirms my article that he has nothing new to offer but merely promised in his manifesto what Governor Ikpeazu is already doing. Now that he has admitted knowledge of the project which came with approval for a free trade zone, he will do well to acknowledge that Governor Ikpeazu has already done what he is promising in his manifesto: Free Trade Zone.

5. Finally Otti has moved from “Abia civil Servants are owed 10 months salary” to now lie that they are owed for 7 months.

If you are a civil servant in Abia State working with Ministries, Departments and Agencies paid directly by the state Government, speak up and confirm if Governor Ikpeazu is owing you even half month salary. We have always stated the fact that only pensioners and few parastatals (not paid by the state govt) have salary payment challenges. While ABSG is not directly responsible for payment of parastatal workers, we are determined to help those of them that have issues overcome their challenges one way or the other.

Abia State University (ABSU), Uturu, is a parastatal and they are not owing. It is the same with ASPIMSS, ABSEDA, BCA etc.

With regards to pensioners, we are determined to solve the challenge and will SURELY do so sooner than later.

6. Otti exposes his cluelessness on how to tackle power supply challenge in Aba and was rambling about renewable energy.

Governor Ikpeazu partnered with FGN to supply uninterrupted power to parts of Ariaria market. He also helped Geometric Power Ltd to get fresh investment from Ruyi Group of China to start delivering steady power to Aba. Geometric has already confirmed Governor Ikpeazu’s efforts and promised to roll out steady power in May 2019.

Furthermore, Governor Ikpeazu’s partnership with FGN also led to the licensing of a new power generation and distribution company for the Ariaria area.

I am happy that Otti did not repeat his previous lies that he owns Geometric. According to him, he only knew about the company while working with Diamond Bank.

7. Mazi Otti claimed that Governor Ikpeazu is deceiving Nigerians with made in Aba promotion and called it a “mere propaganda”. But when challenged by one of the anchors that those applauding Governor Ikpeazu visited the state and saw things for themselves, he started stammering.

Mazi Otti, that anchor was fair to you because he personally visited Aba and saw first hand what the Governor is doing. Vice President Osibanjo also visited and interacted with the people involved. It was after his interaction with Aba manufacturers that then Acting President Osibanjo signed Executive Order Number 3 to help them. That order simply says that before you procure anything from outside NIGERIA you must check if Aba manufacturers and others are either not already producing or cannot produce same.

Atiku Abubakar also met with Aba manufacturers and applauded Governor Ikpeazu for promoting made in Aba.

If Governor Ikpeazu’s focuses promotion of made in Aba is seen by Otti as mere propaganda he should consider apologizing to the 30 young Abians sponsored by Governor Ikpeazu to China to learn automated shoemaking. He should also apologize to those Abia shoemakers and fashion designers sponsored to Egypt by AFREXIM to attend Africa Trade Fair and many be also tell those Aba Shoemakers who serviced the 50,000 boots order from the military.

Otti sef!
Let him come to the groundbreaking ceremony and repeat his lies.

8. The most outrageous false claim of Mazi Otti was that he won in 15 LGAs in 2015 but that it was overturned at gun point.

Haba Otti!
For the records, let me point out that of the 17 LGAs in Abia State, Ukwa/Ngwa people occupy 9 LGAs. Could they have rejected their own son after fighting since 2003 for the position of Abia Governor?

Secondly, Otti’s cock and bull story of former Governor T A Orji entering INEC to point guns at the REC is a sickening fiction movie manufactured by Otti.

While it is a fact that Governor Orji who is a former INEC staff was at INEC to point out to the REC that she lacks the constructional powers to cancel already collated and endorsed results he asked the REC to seek guidance from INEC headquarters to avoid committing a monumental blunder.

It is on record that she made the call and was duly informed that only a tribunal can change or cancel already collated results. On that basis the results were announced and Otti headed for the tribunal to ventilate his grievance, an action that was very much within his rights but was eventually in futility.

Otti went to the tribunal and was clearly told that the REC lacked powers to cancel the result from the 3 contested LGAs. Supreme Court of Nigerian confirmed same position.

The truth is that Otti had no campaign structures in the affected LGAs and his only play was to seek the cancellation of results from Governor Ikpeazu’s home base. Let Otti come out and tell the world why his party didn’t even field a federal houae candidate in Osisioma and had no candidate in one of the Starr constituencies in Obingwa.

What Otti is refusing to state publicly is that he was also at INEC office. First, he went there alone before the polls and was also there with one Shirley who claimed to be a foreign observer during collation. I challenge Otti to deny that he was at INEC on those two occasions and I will produce video evidence.

Did Otti also point gun on INEC officials while there? Who has ever seen Ochendo carry guns? Did the REC, Cecilia or Returning Officer, Prof Ozurumba of UNN, ever complain that anyone pointed guns at them?

Otti now obviously believes his own lies and propaganda.

I will rather leave the stakeholders to answer for themselves and confirm if Governor Ikpeazu shares state allocation with them as claimed by Otti. They are the ones the desperate Mazi Otti is tarnishing their image and they know what to do in response.

10. The most laughable statement of Otti during the program was his promise to build banks in Abia State if elected.

Alex Otti of Diamond bank fame wants to build banks in Abia State after what we read about his activities in the defunct bank? God forbid!

Ladies and gentlemen, you have seen Otti. Let us go and vote for Governor Ikpeazu to do more in Abia State. Otti has nothing new to offer that Governor Ikpeazu has not done or currently doing.