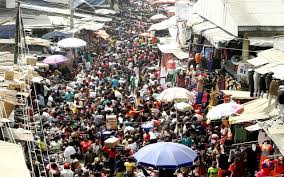 …Intersociety insists in its fresh letter to Anambra Government

Onitsha, Eastern Nigeria, 18th March 2020–In keeping with its thematic mandate of ensuring credible and popular democratic process at community, local, state and federal levels including market associations, the Int’l Society for Civil Liberties & the Rule of Law has again written to the Government of Anambra State, insisting that the pending election at the Onitsha Drug Market, now re-fixed or shifted to 16thApril 2020 must be devoid of all stumbling blocks capable of robbing same of its popularity and credibility.

Intersociety also condemned in strongest terms the reported unilateral and illegal extension for one year of the expired tenure of Mr. Nelson Ojukwu at the Onitsha Ochanja Central Market. Mr. Nelson Ojukwu led elected leadership of the Market was first elected for four years on 11th March 2016, which expired last Wednesday, 11thMarch 2020. Instead of submitting for fresh election, the expired leadership reportedly ‘walked’ and ‘worked’ its way through the office of the Anambra State Commissioner for Trade & Commerce same Wednesday, 11th March 2020 and secured ‘one year extension’.

Intersociety saw it as nothing short of ‘Government interference in the affairs of the Market and undermining of its democratic leadership process. Intersociety therefore accused the Government of Anambra State of sowing a seed of discord, rancor and acrimony-capable of triggering off crisis and violence in the Market and called for immediate reversal of the illegal tenure extension and ensure that fresh and popular election is conducted in the Market soonest.

The said letter to the Anambra State Trade & Commerce Commissioner, Mr. Uche Okafor, was referenced INTERSOC:004/03/20/ANSG/AWK and dated 17th March 2020 and copied to the Executive Governor of the State, the State Commissioner of Police and the Director of SSS; the DPO, Fegge Division of the Nigeria Police Force and the President General of the Onitsha Bridgehead Central Market Association and was signed by three principal officers of Intersociety: Emeka Umeagbalasi, Head of Intersociety, Chinwe Umeche, Esq., Head of Democracy & Good Governance and Obianuju Igboeli, Esq., Head of Civil Liberties & Rule of Law. The three principal officers also signed this statement.

The letter came 36 days after the organization’s first letter on same issue was addressed to the Executive Governor of the State, Mr. Willie Obiano and dated 10th Feb 2020. We had in the first letter called for permanent end to imposition of Government appointed caretaker committees in the market leaderships across the State and their permanent replacement with prescribed elective tenured offices through popular and credible elections.

We also demanded for the use of Option A4 for the pending election at the Onitsha Drug Market, now re-fixed for 16th April 2020; informing that same Option A4was used in the 2009 and 2014 elections in the Market and that in the recently conducted election at Nkpor New Motor Spare Parts Market, conducted weeks ago, the same Option A4 was also used.

We had also in our letter to the Anambra State Commissioner for Trade and Commerce insisted that in the pending election of the Onitsha Drug Market, re-fixed for April 16, 2020, the Option A4 must be used alongside the Line Registers of the Market containing names of all the up-to-date members; so as to ensure that no up-to-date member of the Market is disenfranchised or denied his or her right to participate and vote.

· Electoral Committee: Many traders in the Market spoken to are very apprehensive of the sketchy fate of the electoral committee to conduct the election. The traders of the Market are generally neither aware of the existence of such committee nor its composition and membership. To forestall this, Sir, the traders of the Market must not be kept in the dark and must be allowed to determine the formation of the electoral committee and its membership.

Sources have already disclosed that planning geared toward the election is beginning to suffer credibility problem owing to its poor handling by the Government appointed caretaker leadership of the Market. It has been further disclosed to us that some, if not majority of the caretaker committee members are gunning for different posts in the pending election; thereby raising fears of possible manipulation of the election and its process particularly with regard to formation and composition of its electoral committee.

To forestall this, Sir, we strongly advise that your public office must make sure that the electoral committee is independently constituted and composed. This shall be done in such a way that no serving member of the State Government appointed caretaker committee leadership of the Market or anybody gunning or contesting for any of the elective offices is allowed to make the list of the Market’s electoral committee.

· Timing Of The Election Must Be Kept To Avoid Frustrating Or Scaring Away Voters: Part of the fears being entertained by most of the traders in the Market is possible use of delay tactics on the day of the election-whereby, for instance, election is fixed at 10am in the morning but deliberately delayed till 5pm and above so as to force majority of the voting traders to leave for their homes in anger and frustration. Time keeping for the election is extremely important and must be maintained.

· Avoid Another Postponement: Election into the Onitsha Drug Market has recently been promised and fixed for different dates by your public office, yet same has not been held till date. For instance, it was fixed for Feb 28 and was not held. Now that it has been re-fixed for 16th of April 2020, we strongly advise and call on your office to ensure that it is held without further delays or postponements and under circumstances devoid of tension, intimidation and manipulation.