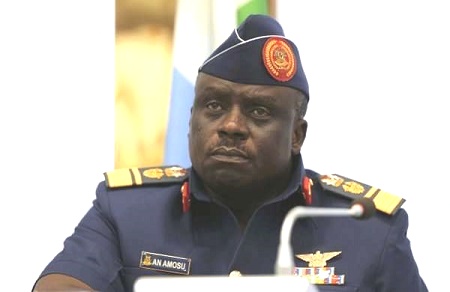 It would be recalled that the said whooping sum of money was recovered by the Economic and Financial Crimes Commission, EFCC. EFCC spokesman, Tony Orilade, said this in a statement in Abuja.

Orilade said the sum of N190, 828,978.15 was also recovered from Air Commodore Olugbenga Gbadebo, a former Director of Finance and Budget of the Nigerian Air Force, NAF.

Besides, Presiding Justice Mojisola Olatoregun has ordered the forfeiture of N101,000,000 recovered from Solomon Enterprises, a company linked to Amosu.

It would be recalled that the court had, in 2018, ordered a temporary forfeiture of the monies to the federal government following an ex parte application filed by the Commission.

But Justice Olatoregun had also directed the EFCC to publish the interim forfeiture order in The Punch and The Nation newspapers for the respondents or anyone interested in the funds to show cause why they should not be permanently forfeited to the federal government.

It was based on the publication of the interim forfeiture order in the newspapers that the EFCC applied to the court seeking the final forfeiture of the various sums of money.

Delivering the verdict, Olatoregun said, “Upon examination of the two applications asking that the interim orders be set aside, dated July 28, 2018, from the first respondent and the interested party, I found no reason to set aside the orders.

“The applications are hereby dismissed. The only conclusion I can reach is that the funds are proceeds of unlawful activity. The affidavits disclose no reason why the order of final forfeiture should not be made.

“That the forfeited funds be paid into the federal government’s Treasury Single Account, TSA, within 14 days, and that the EFCC must file an affidavit to show compliance.

“That the forfeiture proceedings were an “action in rem” and a non-conviction based forfeiture.

“The requirements for the two proceedings are different and distinct. The case (forfeiture) can go in the face of the criminal proceedings.

“In a forfeiture proceeding, evidential burden shifts to the respondents to prove that they obtained the money lawfully, which they failed to do”.

But Justice Olatoregun rejected the argument of the defence counsel that the N22.8 billion fraud charges against Amosu and others were still pending before the court and that the forfeiture order would foist a fait accompli on their clients should they not be found guilty.