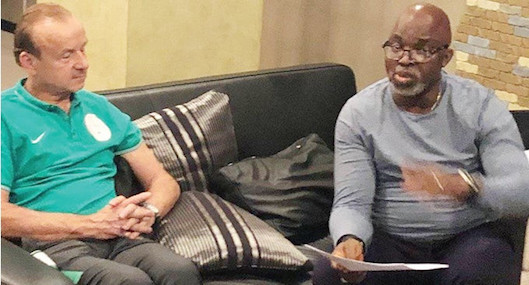 The president of the Nigeria Football Federation (NFF) Amaju Pinnick has debunked reports that the federation is trying to force Gernot Rohr out of the Super Eagles job.

While Speaking as a guest on Channels Television on Monday morning, Pinnick shed light on issues concerning the contract situation of Rohr which has brought about reports on different media that the football body is looking for ways to part with the German tactician.

Pinnick said “we have always been behind him, even when calls were made for him to be sacked after the 2019 AFCON”

“So the truth is when people talk about Gernot Rohr, I know a lot of people that were antagonistic when we brought him in the first time. They said he coached Niger he coached so and so that he is not fit to coach Nigeria.”

“After the World Cup he was accused of not introducing a change if not we would have beaten Argentina, that he is not wanted and that when we lost to South Africa it was the same thing.”

“But the NFF has always been steadfast because we don’t take individual decision, we take collective decision and sometimes we engage the Ministry and get their opinion.”

“Whatever we are doing is in the best interest of the country. Like I said his contract is not radically different from what he use to have.”

While speaking on the possible fallout between himself and Rohr, Amaju said “We’ve always had very wonderful relationship with him,… Like yesterday we were on the phone for like 45 minutes, we talk everyday, I don’t have any issues with him, I don’t have anything against him.”

The football big wig, also cleared the air about the controversy surrounding the payment of Rohr in Naira as well as that of the Super Eagles players.

Pinnick said “When they play in Nigeria, their bonus has been in Naira. Then when they play abroad then we pay them in dollars. But that can even change because like I said we are going to take so many difficult decisions that will go across board because we need to promote our fiscal policy.

While speaking on the process of the delayed contract, he said “The process is ongoing. Two days ago it (contract) was sent to our external solicitor, then it will come back to the NFF before we send it to him. So I believe within that 10 days, this is the seventh day, he will get it and he will respond.”