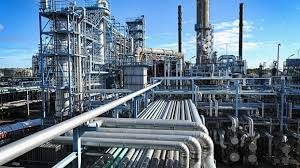 A new refinery project being carried out by Integrated Oil & Gas Limited as part of the $450m Tomaro Industrial Trade Park in Apapa has received a big boost from the United States Government.

Apart from the $800,000 given as support for the engineering design by the United States Trade and Development Agency (USTDA), the United State Export, Import Bank has also offered to finance 85 percent of the US content.

Chairman of the Company, Capt. Emmanuel Iheanacho told SHIPPING DAY that since the refinery itself is of American design, 85 percent of the US content is the Central Processing Unit of the refinery.

Iheanacho also disclosed that the cost of the US content will be $32million.

According to him, “ 85 percent of the US content is the Central Processing Unit of the refinery. The refinery will be of American design. It will cost about $32 to buy that piece. They will give us 85 percent of that money and we will then bring 15percent of it as our contribution”.

However, Iheanacho explained that the cost for the US content was different from the total cost of building the refinery which he put at . $116 million.

He explained, “the amount of the entire refinery is $116 million, so there will be about $80m that we have to look for”.

He expressed optimism that there will not be any issue of funding the project considering the interests demonstrated so far by potential investors.

He said, “we have taken our time to plan this project… if people see the US EXIM investing its money in an idea, if they see the USTDA also supporting by shelling out $800000 of it, then they will know that the project is being well conceived and so it will spur other people to come forward to also put in their resources by way of equity”.

Iheanacho also said some investors have shown interest in the project, but added the company has been adopting the policy of first approach to everything.

He said, “some investors have shown interest. We have been adopting first approach to everything”.

He disclosed that having carried out the detailed engineering work, the company will be hosting technical experts from the United States, Department of Petroleum Resources (DPR) and the Nigeria Export Processing Zone Authority (NEPZA) for a review meeting of the project.

He added, “We are now through with the detailed engineering. We are now going to review the project from the beginning to the end and if there are no negative issues that are raised we will take the report from that project to the DPR and ask for an authority to construct. So technically speaking we have finished designing it, starting from articulating it , market report, first of all carry out the market survey, is there the market for refineries, yes, there is the market, then we go into business feasibility report. We have done that, then we create a model , a financial model to show that there is money in it … We have done all of these things – and they have been approved by the DPR.

“Then the Americans, when they gave us a grant to do the detailed engineering last year, they specified their own parameters to be covered so that if they end up giving us more money, then they know that we are prepared. We have absolutely carried out study necessary for establishing a refinery.

“ So next week the Americans will be coming for us to have a review meeting. The meeting will involve the DPR, NEPZA.. once we finish that meeting and everyone is satisfied, we will then go to the Director, DPR and ask for authority to construct. So, once that is done, we will go into full search for funding – so that is where we will require the services of major accountants in Nigeria – KPMG, PWC , go to people who are likely to invest and invite them. Once we have the money, off we go”.

He commended the Americans for their support so far in the project.

“I like to say that the Americans have been very good to us apart from the money they gave to us, the American Export, Import Bank has indicated interest in financing 85 percent of the US content of our refinery. So, if you calculate how much stuff we are going to buy from the US, 85 percent of it will be financed by the Bank, so that is why the United States Trade and Development Agency (USTDA) specified all those things to be done. We have done it for 12 months. So when we look at all those who are proposing to build a refinery, you will find out what we have done and the report we have generated is far in excess of what any of the local prospective refineries have done”.

8 thoughts on “American EXIM Bank agrees to finance 85% of US content in Capt. Iheanacho's refinery project”