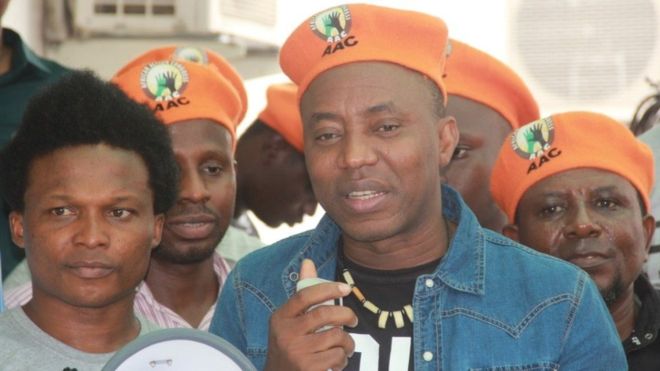 He says Mr. Sowere has completed all the process and procedures for his release on bail as granted by the court to enable him face legal litigation instituted against him by the federal government for a planned Nation wide ‘Revolution Now’ protest organised by him early in August, 2019 and sees no reason why he should still be under the custody of the DSS.

Dr. Lateef to inform and educate the public on the Sowore issue. made the assertions on Tuesday 17th December, 2019 during a radio interview with veteran broadcast Journalist, Mr. ‘Femi Olanipekun in Osogbo Osun state capital in his daily Rave 91.7 fm radio program ‘Frank Talk.’

The law expert commends and applaud federal government effort for quickly addressing the issue before it escalates into crisis that could have breached the peace, unity and stability of the country.

He however on strong terms condemned Sowore’s unlawful protest action and intention which he sees as a grudge against the country’s leader and constitution and this could earn him great penalty if found gulity by a law court.

Dr. Lateef calls on the federal government to be careful and transparent about the present court issue against Sowore as the case proceeds and must make sure that court verdicts prevails in the matter.

He observed that the government has always breached in contempt(disobeyed) court orders and rulings made in legal prosecutions and this he said, may lower the score of President Buhari’s All Progressives Congress(APC) led administration on judicial matters and may again significantly erode the high reputation and value built over the years by the judiciary as the third arm of government in a viable demoncracy, with the powers it has to implement laws made by the country’s parliament to punish those who flout the law.

48 years old Omoyele Sowore was born in Ondo, Ondo state, Nigeria. He attended the University of Lagos for his first degree program and had his Master’s degree in Public Administration from the University of Columbia in the United States of America. He was a former student Union leader, a human rights activist, a pro-democracy campaigner, a Writer, blogger and lecturer. He founded the Sahara News Agency in 2006 and has staged and taken part in many public protests at hom to meet the demand of agitating students or people and to correct or curb the excesses of leaders in power to enhance good governance.

Sowore was on the 3rd of August, 2019 however arrested in the still silence of the night in his Lagos home by men of the state security service when the breeze of the news reached them, that he planned to stage a public protest against the sitting government of president Muhammad Buhari tagged ‘Revolution Now’ that could have plunged the nation into chaos and great political instabilty. He is currently facing prosecution charges on the incident in a federal high court in Abuja, Nigeria.

5 thoughts on “An Expert In Legal Matters Worried Over The Continued Detention Of Sowore By The DSS.”