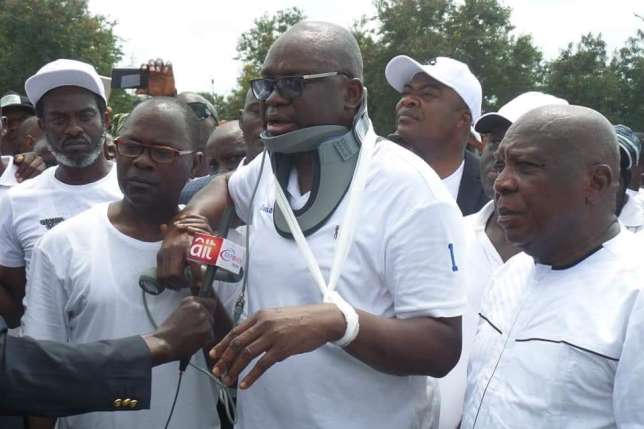 In a bid to enthrone and sustain real democracy in Nigeria, today the 12th July of 2018 about eight thousand members of Peoples Democratic Party Anambra State chapter led by the State Chairman Hon Sir Ndubisi Nwobu embarked on a peaceful city-wide protest along the major streets of Awka, then to the Police Headquarters Anambra State Command.

The protest was in solidarity for the intimidation of PDP me…mbers in Ekiti State and invasion of Ekiti State Government House by the security agents who were supposed to be the umpire in a democratic process.

The Chairman of the party addressed the party members and handed over the letter to the DCP for the onward transmission to the Inspector General of Police.

The Deputy Commissioner of Police while receiving the mammoth crowd pleaded with members of the party that he will deliver their message to IG through the CP, as the CP was on official assignment.

He also thanked the members of PDP for the peaceful conduct of the protest and urged them to be law abiding.

The protest was attended by all PDP Ward executives in the 21 LGA's of the State, Party members and state executive members of the party

Borno Governorship should be zoned to south, group demands