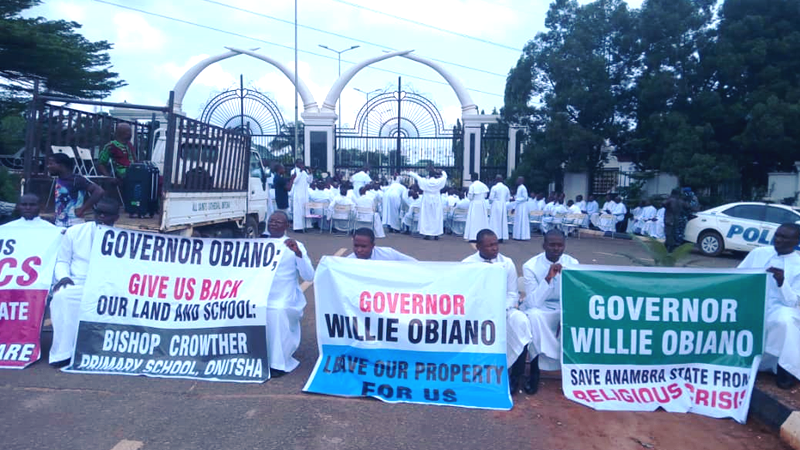 (Chima Ubani Center: Onitsha Nigeria: 8th November 2018)-The war of words and other controversies trailing the recent public protest in front of the Anambra State Government House at Awka by priests of the Anglican Communion of the Diocese on the Niger under the leadership of their Diocesan Bishop, Rt. Rev Dr. Owen C. Nwokolo are clear signs of dangers ahead in the politics of Anambra State particularly its governorship and deputy governorship seats.

Intersociety is not bordered about the public protest by the Anglican priests which is part of the foundation of civilized society and democratic process, but the war of words and other controversies thrown up by the protest are the grounds upon which we are deeply bordered or worried. Our speaking out strongly is to guard against the rise of monster of denominational extremism in the politics of Anambra State. Our position here is also taken to avert the possible reduction of the art of governance of the State to “Catholic Government of Anambra State” or “anti secular Government of Anambra State”.

It deeply borders Intersociety that the protest has degenerated from complaint over the rightful of ownership of one Crowder Memorial Primary School, Onitsha to disturbing verbal bickering between the Anglican Diocese on the Niger and the Government of Anambra State led by Mr. William Obiano. It has further degenerated to unguarded utterances and counter protests by those strongly believed to be sponsored or hired by the State Government or the Catholic Church as well as attempts to introduce denominational dichotomy into the politics of the State.

It must be remembered vividly that this is not the first time in recent years that public protests by the Anglican Church or Communion concerning ownership of certain primary or secondary schools and their lands are staged in the State or any part thereof. On 18thAugust 2014, few months into the Obiano Administration, similar public protests were organized in Onitsha over ownership of the Oyolu Eze Primary School and its land located at Nkwelle Ezunaka Community in Oyi Local Government Area of Anambra State. The protesting Anglican priests had then laid claims to ownership of the school.

Disputes over ownership of certain primary or secondary schools and their lands in Anambra State have also in no long past led to brawl between some priests of the Anglican and the Catholic Church and various youth groups belonging to the two denominations. One of such dispute leading to the said fisticuffs took place over the ownership of the Lafiaji Primary School and its land located at Fegge area of Onitsha.

The two denominations are also notorious when it comes to encroachment and illegitimate possession of government primary, and sometimes secondary schools and their lands across the State. These they do by crookedly or cunningly gaining entrance into them as “temporary place of worship” including church services and crusades; from where they crookedly “walk their way through” and start fencing them and erecting priests’ houses before erecting main church buildings and final conversion of same into their properties. During the administration of Dr. CC Mbadinuju (a Pentecostal), between 1999 and 2003, the shoddy practice was also rampant or the order of the day.

It must be remembered here too that the policy of taking over of church and private schools in the State was necessitated by protest letter by four Anglican Clergies written to the Ukpabi Anthony Asika Sole Administration of the defunct East Central State; leading to the enactment of “Government Schools’ Takeover Edict of 1970”, ceding both missionary and private schools to Government.

Late Anthony Ukpabi Asika was appointed the Sole Administrator of defunct East Central State in 1967 and he held same till 1975 under Gen Yakubu Gowon military regime. One of the main reasons given for inviting Government to takeover church and private schools in 1970 also bordered on allegation of denominational marginalization; which, again, has reared its ugly head in the instant case.

We welcome the public protest by the Anglican Priests are disturbed by degeneration of issues behind same to denominational extremism and dichotomy. We also condemn, unreservedly, the poor response of the present Government of Anambra State toward the constitutionally guaranteed protest. Both the concerned Anglican leadership and the Government of Anambra State should have acted maturely and harmoniously in addressing the germane issues raised. Had the Governor himself shelved his ego and pride to address the protesting Anglican priests with firm promise of looking into their grievances, the matter would not have lingered or degenerated.

Further, since the ownership dispute over the said Crowder Memorial Primary School has been revisited and investigated by Hon Justice Godwin Ononiba’s Panel of 28th December 2012 and report issued, the Government of Anambra State and Governor Obiano should have acted on the report and saved the State unnecessary stress, pressure and deviation or distraction from direly needed governance attention. This is more so when the present Government of Anambra State has retained its predecessor’s policy of returning schools to their missionary owners.

It is our firm position that any school in the State validly found to have originally belonged to a church as at 1970 and before same, irrespective of denomination, must be returned to its rightful owners in line with the existing Government policy of relinquishing its post civil-war annexed schools to their rightful owners. On the other hand, all schools originally belonging to the State Government found to have been annexed or crookedly possessed by churches across the State; other than those originally or validly built by them from 1980s, must be recovered and retained by the Government of Anambra State.

What constructively and inexcusably borders most citizens of Anambra State is not distractive and endless squabbles over which church owns what school in the State or any part thereof, or which school is owned by Government or a church denomination; rather it is the accessibility, quality and affordability of education in the State particularly in the area of nursery and primary education that matters most to them. The shylock and extortionist posture or highhandedness of the church and private nursery and primary school owners in Anambra State have remained the nightmare of most Anambra parents including medium and low income earners.

It saddens our heart that most, if not all nursery, primary, secondary and tertiary schools in Anambra State belonging to churches are built and completed using monies contributed by members of church congregations or laities dominated by low and medium income earners; only for such schools to be made far beyond what they can afford in the area of sending or training their children and others under their care in them.

The four categories of schools above named, belonging to churches in Anambra State are so exorbitant that children of their most members cannot afford sending or training them in same; yet they contributed over 70% of monies used in building them. The protesting Anglican Communion priests in the State; likewise their Catholic and Pentecostal counterparts must therefore learn how to go the equity with clean hands. The schools owned and run by them are nothing to write home about in terms of accessibility and affordability. They are nothing short of extortionist enterprises or conduit pipes for maximization of profits and primitive wealth accumulation.

The present Government of Anambra State is also goofing; making itself a government hanging in the air; totally disconnected from the people it governs and their social impulses. Talking about school system and its inaccessibility and extortionist or exorbitant culture, the present Government is too far from knowing what most Anambra parents go through in the hands of shylock and greedy church and private school owners especially in the area of nursery and primary schools.

What is spent by parents to train a child of theirs in nursery and primary school in the State is far more than enough to fully train a university undergraduate in a federal public university. The cheapest sum paid to enroll a child in a private or church owned pre-nursery/nursery or primary school is not less than N40, 000.

In many poor or medium standard nursery or primary schools in the State especially in urban areas, not less than N60, 000 is charged as enrollment fee and in some cases, as single term school fee only. Parents with four or five nursery and primary school age children spend as much as N200,000 especially during class promotion new terms. These account for high incidence of school dropouts and school hour hawking and street roaming in the State.

We therefore call on the present Government of Anambra State and Governor William Mmaduabuchi Obiano to break the monopoly and greediness of the church and private school owners in the State especially in nursery and primary schools by reversing the State’s primary school calendar to incorporate or transform it into “Anambra State Nursery/Primary School Calendar or Curriculum”. This should be followed by massive injection of capitals into the System for the purpose of massive renovation of the Government primary school blocks as well as upgrading including electrification and computerization of same across the State benefiting the global reading trend of the pupils.

The policy must also include retraining of primary school teachers to accommodate teaching and care of pre-nursery and nursery school pupils, etc. The State nursery-primary school fees should be declared free and where it is not tenable in the mean time, no pupil should be charged more than N1.500 to N2, 000 per term. There shall also be total elimination of all forms of Government and teachers’ extortion and allied others. Procurement of school uniforms and reading materials should be standardized by the school authorities or Government but left in the hands of parents and guardians to provide same from open markets.

Knocks, Knocks As Buhari Rules Out Fraud In $25b Nnpc-gate

Granted! The Smartest Igbo Man East of the Niger River

THE SON-OF-THE-SOIL SYNDROME, ETHNIC BIGOTRY AND LESSONS FROM OUR COLONIAL MASTERS