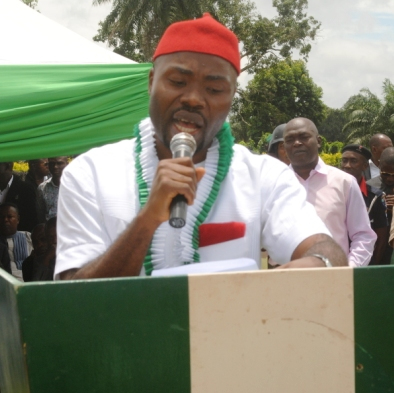 The council boss who described Okowa's kind gesture as a sign of true democracy, said Okowa, has indeed exhibited what he stands for (Ekwueme), saying that the council in return would work hard to ensure his re-election.

Speaking shortly in Asaba after the governor announced the release of N5 billion to upset the unpaid salaries arrears of council workers across the 25 local governments in the state, Oseme, said the gesture would complement his giant stride in the past three years.

He said “Governor Ifeanyi Okowa is truly the Ekwueme of Delta politics. He works his promise to the state. We have all been wondering how the governor has been able to carry on with the projects he is running in several communities in the state despite the drop in resource to the state. And now he has given directive to all the council chairmen to clear all the backlogs of the workers’ salaries, in fact, he has done it again, what he is known of”.

Oseme, said that this kind gesture would go a very long way in ameliorating the financial sufferings of the workers at the council level and boost the welfare and as well as their attitude to work.

While he gave a thumb up to the governor, Oseme, expressed satisfaction with the developmental strides of the state governor, Dr Okowa, in the midst of the economic challenges.

He charged electorate in Delta state to sustain the current ‘good developments’ in the state by ensuring that the incumbent state governor, Dr Ifeanyi Okowa, is reelected in 2019 general election.

#AnambraDecides: INEC To Begin Distribution Of Election Materials On Wednesday