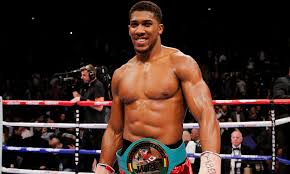 Anthony Joshua is optimistic about beating New Zealand’s Joseph Parker whey they go out in the Ring at the Principality Stadium, Cardiff, Wales on the 31st of March 2018.

Joshua who currently holds the WBA and IBF belts says he does not see any human stopping him, a�?I took my time last time out (against Carlos Takam) because I wanted to set up a good 2018. Ita��s about making history now, ita��s an honour to be up here with another world champion.

a�?I take everything with a pinch of salt, I dona��t know what to make of Parker. Ia��m looking forward to the challenge, not only from a physical standpoint but also from a mental one.

a�?People have used me getting dropped by Klitschko as a PR stunt. Ia��ve been dropped three times but I learned from the adversity and that it will take more than a human to stop me. The other rumours are fake news.a�?

He said, a�?Ia��m looking forward to leaving here and heading back to Vegas to start camp. Ia��ve watched Joshua for a long time, I know his strengths and his weaknesses. I cana��t wait for this fight.a�?

8 thoughts on “Anthony Joshua Confident Of Victory Against Parker”