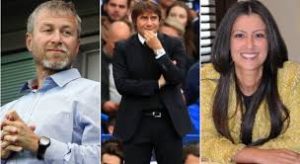 Conte pointed to Man Citya��s runaway success, with Pep Guardiola’s team going into the game at least 15 points clear at the top and needing four wins to clinch the title. And with Conte expected to leave at the end of this season if not before, the Italian renewed that attack on Friday night.

a�?I don’t know if my ambition is shared by the club,a�? he said. a�?It’s very important to have coach and club with the same ambition: to improve the team, the quality of the players. If you have this situation, you can win the League, the FA Cup, the Champions League.

a�?I have great ambition but I don’t have money to spend for Chelsea. The club knows what my ambitions are. When you decide to work with this type of coach, you take on a coach with great ambition. Not a loser a�� a winner.a�?

By kick-off at the Etihad, Chelsea could be five points behind fourth placed Tottenham, with just 10 games remaining.

It has been a campaign which has seen the Italian at war with the Chelsea hierarchy from the word go, with Conte constantly agitating that he has not been given the players he wanted to build on that title win.

He added: a�?The league this year was finished after the first part of the season. Man City won it then. This is a great frustration for me, my players, my club. If your name is Chelsea, you have to fight until the end.

a�?City are on a fantastic path. When there is a great feeling between manager and club, you can work the way you want. City also had the possibility to spend a lot of money.

a�?When you link these two a�� a good manager and money to spend a�� and have the same ambition, this is the result.

a�?When there is confidence and money to spend, one plus one equals two.

a�?Pep has shown himself to be a great coach. It will be very difficult now for other teams to fight City. The situation is going to improve for them.a�?

Conte, whose team have lost three of their last four Premier League games, added: a�?Every club has to understand what their target is. We have to try to get a place in the Champions League. Last season we did a fantastic job. But you have to continue to build.a�?

Unbeaten Tigers a cut above the Lions