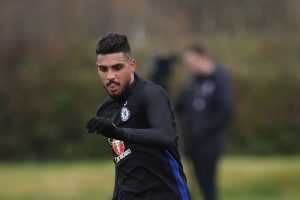 Once identified by Juventus as a potential replacement for former Chelsea transfer target Alex Sandro, Brazilian-Italian left-back Emerson Palmieri skipped that intermediary step and joined the Blues directly from AS Roma, arriving on the final day of the January transfer window in classic Chelsea style. While Juventus were setting prices in the a��60-80m range for Alex Sandro, Chelsea were able to get Emerson for just a third of that, paying an initial a��20 million transfer fee with another a��9m in potential bonuses and add-ons agreed. In today’s market, that’s basically the equivalent of paying a��8m to Marseille for CA�sar Azpilicueta in 2012.

Emerson would’ve surely commanded a much higher transfer fee had he not been struck down by a cruciate ligament injury, which sidelined him for the previous six months. While that clearly presents a risk even with modern surgical and rehabilitation techniques, his current and former teammate Antonio RA?diger has vouched for the new arrival’s quality, having played together with him all of last season. Incidentally, RA?diger himself experienced a similar injury the year before, while Chelsea’s best defender, CA�sar Azpilicueta also battled through one when he was younger.

a�?He’s a player who did very well at Roma, especially last season. We played in Rome with the same system as we do here, so he was the left wing-back. Most of the time I was playing on the left of the back three so I was next to him, and he was a big help.a�?

a�?He’s good at the offensive part, and also good at the defensive part. He is not afraid to make tackles, and he can play one against one because he’s physically good. He also has good pace. For me he is a very good young player with potential.a�?

Emerson could have stayed at Roma to finish his recovery and continue his success in Serie A, but he decided to take his chances with the greater challenge on the Premier League. Unsurprisingly, he chatted with RA?diger prior to making his decision.

a�?I just told him, ‘You have to decide for yourself’. I could have said whatever I wanted, but he had to listen to his feelings. I told him that maybe this chance comes only one time in life.a�?

a�?I told him about the league. It’s one of the best leagues, and Chelsea is a good club. Of course Roma are a good club as well, but for this kind of decision you must decide for yourself.a�?

As we often find, adapting to England is not always the easiest task, regardless of success elsewhere. Thankfully, RA?diger, who seemingly had no problems whatsoever settling in to life at Chelsea, will be there to help Emerson’s through any potential obstacles.

a�?He is a very, very humble guy. To help him is a duty for me. Me and him were very close in Rome, and I want it to be the same here. I want to be like a big brother for him.a�?

Emerson made the bench in Chelsea’s 4-1 loss at Watford, but even though Marcos Alonso had to miss out through a small knock, Davide Zappacosta started on the left instead. Conte likes to take his time in introducing new signings, but could Emerson perhaps be in line for a start on Monday?

We will checkmate all plots to rig forthcoming supplementary polls: PDP

Ronaldo And Portuguese Teammates Donate To Amateur Clubs In Portugal