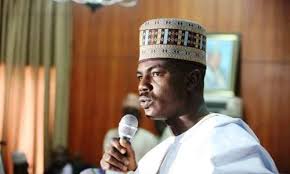 The Borno State Chief Judge, Justice Kashim Zannah has threatened to sack any Judge or Judiciary official found wanting or caught indulging in any corrupt practice in the discharge of his or her duties.

He said ” if you are found in corrupt practices and it is established, we are not going to demote or transfer you, we will send you packing”.

” Transferring a corrupt judge or judiciary official means you are transferring corruption to onother place, or local government. Establishing corrupt cases is fundamental in order not to jail an innocent person “, Zannah said.

The CJ added , ” I call onyone to report any corrupt judge or judicial officer to my office and the public complain committee. Once he is caught and it is established , we will send him/her packing “.

“Corruption never dies, fighting corruption is a continuous war and like a battle, you have to fight it continuously to it’s end. So we have to collectively fight corruption because corruption will definately fight back through tribalism, religion and communities”, Zannah said.

” In fighting corruption we have to involve our malls, families, communitie and all other stakeholders and not only at the federal, state, or local government levels but as well as community and private sector”, Gamawa said.

While the Borno State Attorney General and State Commissioner of Justice, Barrister Kaka Shehu Lawan commended the Maiduguri and Biu branches of the NBA for organising the Town Hall Meeting, saying,” which is not only apt and timely but will go a long way in.addressing corruption in the state and the country at large”.

Justice Kaka shehu who was represented by the Acting Permanent Secretary of the Ministry, Barrister Abdullahi Izge said, ” I call on the participants of this all important town Hall meeting to put into use the knowledge discussed at the end of deliberations.”

The NBA Chairman Maiduguri Branch, Barrister Mohammed Umar said ,” today’s Town Hall Meeting with theme ,” Towards Tackling Corruption in Borno State: Prospects and Challenges,” is an important day in our noble profession and it shows our strength and commitment in fighting corruption “.

He said, ” any member of the NBA who is found wanting in any corrupt practices will be shown out of the noble profession.

Welcoming participants, the Chairman Local Organising Committee, Barrister Babakura Alhaji said, ” the Town Hall Meeting is organised to bring all heads together to chat a new course for a cortupt free society.

PHOTOS: Gov Yahaya Bello Of Kogi Opens His New Mansion Even As Workers Salaries Are Not Paid |TheCable