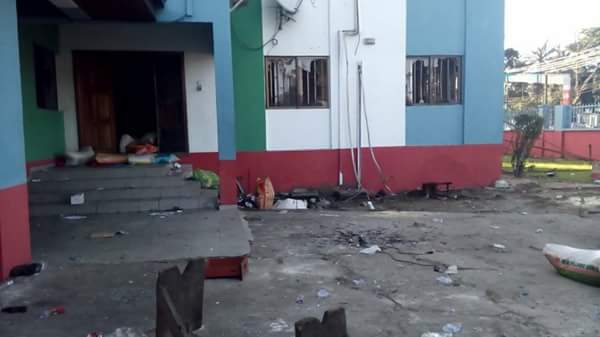 There is no end at sight over the leadership crisis currently rocking the All Progressive Congress (APC), Rivers State chapter as hoodlums allegedly stormed the factional secretariat of the party located on Port Harcourt/Aba road and vandalised the office.

The vandalised secretariat is being occupied by Senator Magnus Abe faction of the party.

Speaking to Journalists after inspecting the vandalised building on Saturday, a chieftain of the party and member of the House of Representatives, representing Ikwerre/Emohua federal constituency, Hon Chidi Wihiokha pointed accusing fingers at the other faction of the party loyal to Chief Rotimi Amaechi, Minister of Transportation.

He said, “Two days ago, there was a threat by a member of another faction of the party (names Withheld) to destroy the secretariat. I reported the matter to the CP (Zaki Ahmed) to deploy a trooper to secure the place. Senator Magnus Abe also called him (the CP) he said he would do something about it.

“This morning (Saturday), some hoodlums came here backed up by operatives of SARS and destroyed everything at the secretariat. They also entered into people’s houses and rob them of their phones and other belongings. This is arson and I call on the Vice President, Professor Yemi Osinbajo to tell the Inspector general of Police to find out from the CP who has been giving them security coverage.

“You remember that this same action was taken by this faction when they led some hoodlums to destroy the Judiciary gate in May, just to disrupt justice. The CP must arrest them to give account of what happened to the new APC secretariat”, he said.

Also speaking, a welder who was working at the premises at the time of the attack said that the hoodlums stormed the secretariat in five buses at about 8 o, clock in the morning backed up by a hilux load of armed police men.

The welder who gave his name as Fortune Edeboh said he saw “about five buses and a lot of angry looking boys. They destroyed the chain at the gate and started to destroy the party’s flagpoles by pulling them down and tearing the party Flags. They almost rough-handled me but I pleaded with them that I was just at the place to work”.

Also, Moses Friday, a gate man at the premises confirmed that buses loaded with armed boys arrived the secretariat about eight and started to destroy anything they saw there.

Pdp To Embark On Nationwide Protest Over S/court Verdicts

9 thoughts on “APC Factional Secretariat In Rivers Vandalized By Hoodlums”