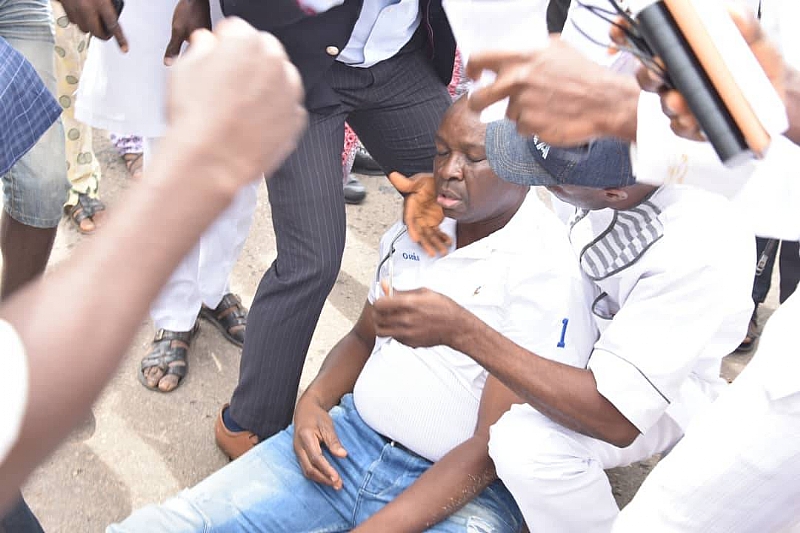 Today, those holding power in Abuja placed knife on the neck of

democracy by unleashing terror on the peace-loving people of Ekiti

State, including the governor, Ayodele Fayose.
Attempt was clearly made to assassinate the governor. He only escaped

by the whiskers. That was after the policemen had openly assaulted

him.
The armed MOPOL had barricaded the government house, preventing

movement in and out of the seat of power in Ekiti State.

The mission of the policemen, who acted on the instruction of the APC

governorship candidate, Kayode Fayemi was to prevent the PDP from

holding its victory rally slated for today. The APC was so intimidated

invaded the Campaign Office of our governorship candidate with armed

policemen.
When Governor Fayose came out of the government house at about 11am to

inquire why the government was blocked, the MOPOL Commander said

openly that “governor my foot.” He said he had instruction from above

to kill whoever challenged his authority and before one could say

jack, he ordered that his men should start shooting and firing teargas

canisters.
In the process, Governor Fayose sustained injury and fell. He was

immediately rushed to the government house clinic and later to the

State University Teaching Hospital, Ado Ekiti where he is recuperating

now.
With what happened in Ado Ekiti today, Nigerians and the entire world

will unleash on the people on Saturday.
It should be clearer to people of good conscience that these APC

people do not want the votes of Ekiti people to count. They have

they are living up to it, with the police and DSS acting as their

terror army.
The most dangerous signal being sent by the APC is that there will be

before then.
Lovers of democracy and progress of Nigeria must therefore rise in

defense of the country now, before it is too late. Nigerians must not

allow these APC desperadoes to collapse democracy and turn the country

to a captured territory.
Let’s save Nigeria now before it is too late.

Here in Ekiti, it is very clear that the APC does not have the support

of the people. The people of Ekiti are desirous to elect their

governor by themselves and no amount of intimidation and harassment

will stop them.
We call on the people of Ekiti to be law-abiding and on Saturday, they

are protected. In the end, the might of Ekiti people will prevail over