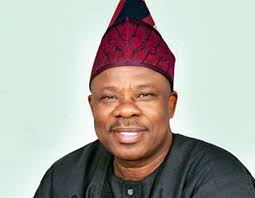 The aggrieved faction of the Ogun State Chapter of the All Progressives Congress, APC, has presented a four-point request to the party’s Presidential Reconciliation Committee.

The faction loyal to the state Governor Ibikunle Amosun is asking the national body of the party to declare Hon. Adekunle Akinlade as the governorship candidate of the party.

The three-man presidential committee, headed by Sandra Oladele, had yesterday met with all the 26 candidates who were declared winners of the October 7 legislative primary by the National Working Committee Primary Committee but had their names replaced.

The meeting was held at the party’s secretariat in Abeokuta, the state capital. The party leadership in the state demanded the recognition and declaration of the 26 candidates who emerged from the primary conducted on October 7.

The Chairman of the party, Derin Adebiyi, while addressing the panel, said “the only condition for reconciliation is for Akinlade’s name to be sent to the electoral body.”

They said for peace to return in the party, the name of Akinlade should be forwarded to the Independent National Electoral Commission, INEC, as the winner of the governorship primary of the APC in Ogun.

Adebiyi, who was represented by the Chairman of the APC in Ogun Central Senatorial District, Yomi Ademefun, added, “Declare the primary election that produced Hon. Abdulkadir Adekunle Akinlade that took place across Ogun State on October 2 as authentic.”