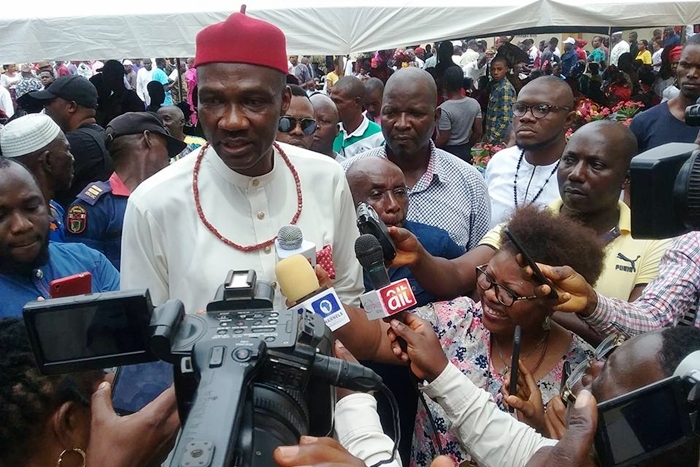 A chieftain of the All Progressive Congress (APC) and gubernatorial aspirant in the 2019 general election in Delta State, Dr. Cairo Ojougboh, has lambasted the incumbent governor of the state, Ifeanyi Okowa, saying that the governor has no iota of integrity left in him.

Ojougboh, who alleged that the N13.6 Billion pumped into the ongoing mega secretariat complex, remains a high scale fraud meant to impoverish the state treasury to amass wealth for himself (Okowa) to the tune of $18 Million.

The governorship hopeful also revealed that the Statea��s Internally Generated Revenue (IGR) have been allegedly mortgaged for 4 years in respect of the project.

Ojougboh stated this on Saturday, April 14, 2018 at Kwale, Ndokwa West local government Area of the State, during the launch of his a�?One Man, One Vote Campaigna�? in Ndokwa Nation.

He also alleged that the endorsement of Okowa for second term by the Asagba in Council, to tour the Asaba International Airport was due to financial inducement planned to defraud the State to the tune of $18 Million by the Governor, stressing that it has shown to Deltans that the present administration lacks a�?integritya�?.

Hear him: a�?A man who gathered Asaba Chiefs and packaged them to Asaba Airport. When they left, the Governora��s Press said, the Asagba and the Asagba in council has adopted Okowa for a second term but the Council came out and said it was fraud, that they were bribed. Is that a man with integrity?a�? Ojougboh questioned.

Continuing: the APC governorship hopeful disclosed that the party would hold a press conference on the alleged plans to transfer Delta State Tax payera��s money to private pockets. a�?We have the agreement signed by the State and we have the plan by the Bank to wire the sum of $18,000,000 to the Governora��s personal account overseas and we are going to discuss that this week.a�?

On his a�?One Man, One Vote Campaigna�? to Ndokwa Nation, Dr Cairo Ojougboh said it is the weapon to eliminate electoral corruption so that the Vote of every Deltan would count in the 2019 general elections.

a�?It is important that we elect somebody who will stop corruption first and the first corruption to stop is election rigging. If we do not stop rigging, they will out rig us and that is why we are launching the a�?One Man, One Vote Campaigna�? all over Delta State. We must first checkmate the rigging carried out by PDP. APC can win over PDP rigging but we must first purge ourselves of indisciplinea�?.

Ojougboh who however expressed worries that APC would have a tough time in defeating PDP in Delta State, noted that if Deltans do not allow PDP to buy them over with money, APC will emerge victorious, assuring, a�?we will win if we work together as one family. I know that some people are working for Cairo, some for Ochei, Ogboru, Utomi and others, but the beauty of APC in Delta State is that, everyone is working and the aim of this meeting is to work as one family.a�?

While assuring Ndokwa Nation that the marginalization slammed on them by the PDP administration will be history during an APC administration in the State, Ojougboh charged them to speak with one voice in supporting an APC governorship candidate in the 2019 election.

He further informed the crowd of party faithful that his ambition for the governorship position is not a Do-Or-Die affair, saying that anyone who emerges after the party primaries, he will surely work with the person, but noted that he leads the target while others follow.

At the time of filing this report, text message sent to the Chief Press Secretary (CPS), to the governor, Charles Ehiedu Aniagwu, was rebuffed.