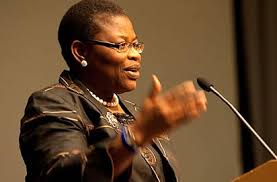 A former Minister of Education and presidential candidate of the Allied Congress Party of Nigeria, Oby Ezekwesili, has declared President Muhammadu Buhari-led administration as corrupt.

Ezekwesili indicted Buhari for shielding corrupt individuals in his cabinet.

The two-time minister declared this on Monday while delivering a speech titled, 'To those who say we cannot win: Unveiling the Oby Ezekwesili Roadmap to 2019' in Lagos.

The former World Bank Vice-President expressed sadness that instead of making progress, Nigeria was retrogressing under the current administration due to zero capacity.

She said Nigeria could simply not afford to continue under the atmosphere of “unsustainable failure” come 2019.

She described 2019 as a moment to terminate bad leadership, retire incompetent leaders and not chose 'anyone but Buhari'.

Ezekwesili, who described the All Progressives Congress and the Peoples Democratic Party as a single party fielding one candidate she called 'Butiku', said Nigerians needed to reject their candidates no matter the 'packaging'.

She said, “What is the primary legacy of President Muhammadu Buhari? It is the destruction of our nation's wealth, presiding over the worst economic recession Nigeria has seen in decades.

“And in the midst of this, his Vice-President was celebrating last week at the Nigeria Economic Summit that handing bailouts to state governors to pay salaries is an achievement. What a big shame!

“There is no shadow of a doubt that President Buhari is the most parochial, most nepotistic and most partisan President that Nigeria has ever seen.”

8 thoughts on “APC Govt. led By Buhari is corrupt – Ezekwesili”