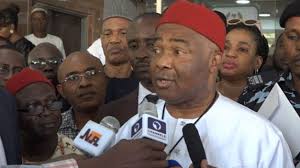 Yesterday, Sunday 16th of February, 2020, critical stakeholders and notable leaders of All Progressives Congress in Mbaise Nation came together at the country home of Engr. Emma Ojinere, the APC Senatorial Candidate for Imo East, in the 2019 General elections, to reaffirm their support and loyalty to the leadership and the Government of Sen. Hope Uzodimma, the Imo State Governor.

Engr. Emma Ojinere, during his opening remarks stated in clear terms that the essence of the gathering is to congratulate the Governor on the restoration of his mandate, which was stolen through a wrongful declaration, and also to assure him of their continued support, in the best interest of the state.

Speaking on the occasion, the former Chairman of APC in the state, Chief Dr. Hillary Ekeh reminded the people of where they are coming from. He stated that by 2018, all they desired was an Imo Governor of Owerri extraction, but considering the circumstances surrounding the struggle for the Imo APC Guber ticket and how it was resolved, the onus lies on all party faithful and as at today, all Imo people to join hands together with Gov. Hope Uzodimma to move Imo state forward.

He further stated that Gov. Hope Uzodimma is not a dark horse or an upstart in the business of Governance, having first contested for the office in 2003!

Chief Ekeh, who currently sits on the board of Anambra-Imo River Basin Authority, urged all who had any grouse or Axe to grind with anyone in the party to put their differences aside and work for a better Imo State that will benefit all.

Others speakers reiterated same position. So many leaders turned up for the meeting, on short notice while a few others duly sent in their regrets.