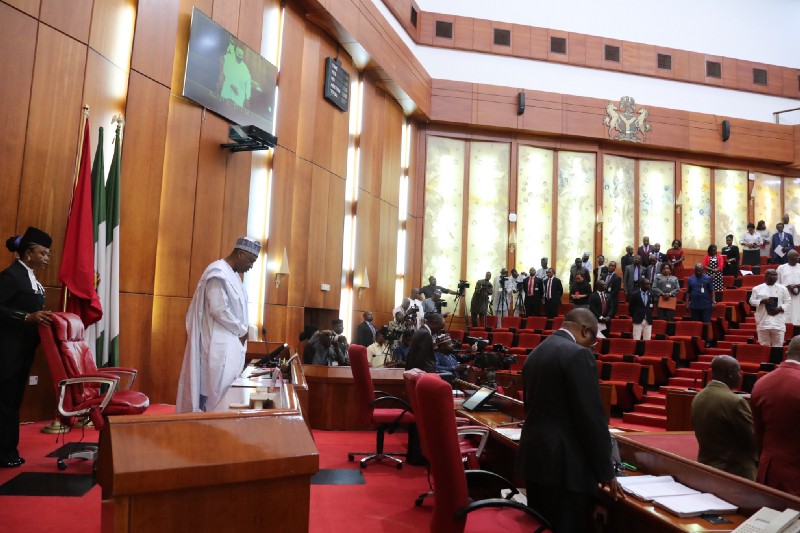 “The principles of a free constitution are irrecoverably lost, when the legislative power is nominated by the executive.” – Edward Gibbon (British MP, between 1774 and 1784)

Following the overwhelming victory of the ruling All Progressives Congress (APC) in the February 23, 2019 presidential/National Assembly elections, the National Chairman of the party, Comrade Adams Oshiomhole, announced the adoption of Senate Leader, Senator Ahmad Lawan, and House Leader, Hon. Femi Gbajabiamila, as the next Senate President and Speaker of House of Representatives respectively.

The APC clinched majority of the federal legislative seats, thereby paving the way for it to produce the presiding officers in the Red and Green chambers of the ninth National Assembly expected to be inaugurated on Tuesday, June 11, 2019. The Oshiomhole-led National Working Committee (NWC) claimed to have zoned the Senate Presidency and House Speakership to Northeast and Southwest respectively, and further micro-zoned the two positions to Lawan from Yobe State and Gbajabiamila from Lagos State.

After the pronouncement of the endorsement by Oshiomhole, the national leader of APC, Bola Tinubu, warned that anyone found acting against the party’s ruling on the micro-zoning will be punished. Tinubu, who is believed to have a hand in Oshiomhole’s choice of Lawan and Gbajabiamila, was quoted as saying that “Party discipline is key… We are going to respect our party and we are going to apply the whip. It is either you stay with us or you follow us or you leave.”

The verdict of Oshiomhole’s NWC ceding the Senate Presidency and House Speakership to Lawan and Gbajabiamila was widely condemned by various groups and individuals within and outside APC. The APC Zonal and State Youth Leaders Forum, had particularly expressed worry that Oshiomhole was applying the same approach of micro-zoning, which caused serious problem for the party in 2015. The APC Youths Forum maintained that what the governing party should have done was to zone all NASS positions to accommodate the six geopolitical zones for equity and fairness, and allow stakeholders at the zonal level to own and determine the process.

In a communiqué issued at the end of its meeting in Abuja, the APC youth leaders said: “Whilst we agree with the initiative to determine National Assembly leadership within defined parameters of zoning and ranking to ensure stability and discipline within the ranks of the party, we must do so without undermining the independence of the legislature. We consider micro zoning as a recipe for chaos mindful of the experience of 2015.”

The APC youths put a question mark on the so-called party decision, contending that no NWC resolution can stand as party decision without ratification by the National Executive Committee (NEC). Article 13, Sections 13.3 and 13.4 of the APC Constitution (2014 as amended) was cited to buttress their argument.

A respected chieftain of APC, Prince Tony Momoh, was one of the prominent Nigerians that picked holes in the party’s decision to impose candidates on NASS for legislative positions. Momoh, a former Minister of Information and close ally of Buhari, noted that lawmakers have always resisted imposition, preferring to choose their own leaders without allowing interference from outsiders.

In the United States Congress, it is usually the party caucus or conference in the House of Representatives that choose a candidate for the speakership from among its ranking members. In October 2015, when John Boerhner, a Republican Congressman was to resign as Speaker, Kevin McCarthy, the then Majority Leader (now Minority Leader) was at first seen as the frontrunner among those hoping to replace Boerhner. McCarthy had also previously served as a Majority Whip.

But due to stiff opposition from the Freedom Caucus, a group of conservatives within the House Republican Conference, McCarthy’s bid for Speakership in 2015 was thwarted, despite being the Majority Leader at that time. Ryan who had never been a principal officer got the mandate of his Republican colleagues to take over from Boerhner, the then outgoing Speaker. This plainly indicates that the decision on who becomes the Speaker or a principal officer in the US Congress is purely that of the Congressmen. No Chairperson or an influential member of a political party can impose leaders on the Congress like Oshiomhole and some persons are trying to do.

Even in a parliamentary system of government, where there is fusion of powers (between the executive and legislature) and party discipline appears to be very strong, party supremacy does not prevail in the election of presiding officers of the parliament.

In the 2009 Speakership election of the British House of Commons, the incumbent Speaker, Rt. Hon. John Bercow, a then conservative MP emerged victorious against the favoured candidate of his party, Sir George Young. Young had also unfortunately in the year 2000 Speakership race of the Lower House lost to the late Rt. Hon. Lord Michael Martin, even though he enjoyed the support of party leadership.

The case of MP Young which is akin to the fate that befell Lawan and Gbajabiamila in 2015, points to the fact that party endorsement for parliamentary leadership positions means nothing, and can only mar the chances of the so-called anointed candidates. This is what those behind the adoption of Lawan and Gbajabiamila over other aspirants failed to realize.

'No APC candidates, no elections in Zamfara', Gov Yari Declares