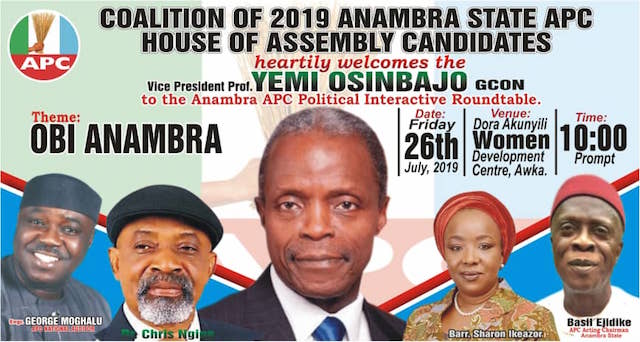 As the November 2021 gubernatorial election draws near in Anambra State, the All Progressive Congress, APC has been described as a winning party that will surely emerge victorious and take over the state from the ruling All Progressive Grand Alliance, APGA.

A stakeholder of the party (APC) in the state, Hon. Paul Ezeobi made this known while addressing newsmen in a one-day Roundtable Discussion, tagged ‘Obì Anambra’ organized by the state chapter of party with the Vice President, Prof. Yemi Osinbajo, and which took place in Awka, the state capital.

Hon. Ezeobi who contested under the party to represent the good people of Nnewi South Constituency 2 in the state House of Assembly highlighted some of the internal and external challenges that have been confronting the party in the state, which he said was the primary reason for hosting the Roundtable Discussion with the Vice President, to discuss the way forward.

Disclosing that the Roundtable Discussion meeting was the first of its kind in the state since the creation of the party in 2013, he thank the leadership of the party in the state, and further expressed optimism that the outcome of event and the Vice President’s visit will be very fruitful and go a in moving the party to the next level in the state, as well as in earning them a landslide victory in the highly anticipated 2021 governorship election, the preparations for which he said they were already hatching.

The APC Chieftain who also doubles as the Coordinator of

the Coalition of 2019 APC ASHA Candidates in the state, on whose behalf he spoke, also called on the members of the party, especially the aggrieved ones to continue to remain loyal and committed to the party, even as he called on the Federal Government and the National leadership of the party to always remember, consider and include the party faithfuls in the state in every program, slot or initiative that comes up from or at the center, as a way of encouraging them, especially those ones who have laboured day and night with their time and resources to see that the party remains alive, progressive and functional in the state.

“…part of why we are here today is to close those gaps, and ensure that party unites for a better outing, come 2021” he added.

He further used the medium to congratulate Sen. Dr. Chris Ngige and Barr. Mrs. Sharon Ikeazor on their nominations for ministerial positions by the President Muhammadu Buhari-led Administration, even as he lauded the President for finding the two Anambra indigenes worthy for such juicy positions, and prayed for God’s wisdom and strength in their discharge of their respective responsibilities.

Conclusively, he called for peace and unity among the party members in the state to enable them achieve the high task before them, with which he noted that victory was already assured for the party, come 2021.

The event had its theme as: Repositioning APC Anambra State in The Next Level Era”