APC’ll face setbacks in 2023 if Oshiomhole is not tamed: Okorocha

APC’ll face setbacks in 2023 if Oshiomhole is not tamed: Okorocha 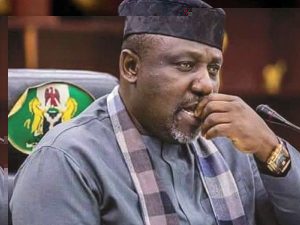 GOVERNOR Rochas Okorocha of Imo State warned on Monday that the ruling All Progressives Congress could lose its bearings completely by 2023 if the National Chairman of the party, Adams Oshiomhole, was allowed to continue to run its affairs the way he was currently doing.

Okorocha claimed that Oshiomhole was also to be blamed for the party’s failure to capture or retain some states during the February and March general elections.

The Imo governor, who is battling to get a Certificate of Return to the Senate from the Independent National Electoral Commission, spoke with State House correspondents in Abuja after he held a meeting with President Muhammadu Buhari.

He raised a particular issue concerning the zoning of the principal offices of the 9th National Assembly, noting that it would appear that the party had concluded to ignore the South-East.

Okorocha stated that ignoring the South-East might be the beginning of real trouble for the APC ahead of 2023 general elections.

The governor said, “I have been watching carefully what is happening in the National Assembly; it is a very interesting drama. But all I ask of them is that they should consider the South- East in their calculations.

“This nation will not be properly balanced if the South-East is not carried along properly in the affairs of the National Assembly. Nobody seems to be talking about the South-East; it looks like the South-East doesn’t have a place anymore. That is wrong, politically speaking and that will not be good for the APC because there is going to be a bigger APC after President Muhammadu Buhari must have left the seat.

“My fear now is that the APC may have a serious setback in 2023 because the Oshiomhole-led executive is actually turning the APC into a regional minority party, which shouldn’t be. Right now in the whole of the South-East, we don’t have an APC governor. So, if there is any discussion in Nigeria now within the APC governors and President Muhammadu Buhari, there will be nobody from the South-East. This is what the APC chairman has done in the South-East.”

On his inability to get the certificate of return, Okorocha again blamed the problem partly on the leadership of the party, which he said, did not seem to bother.

“He is the one that is behind all the imposition (of candidates)… This is why internal democracy must be respected; let the will of the people prevail rather than this imposition. It is unfortunate what has happened in Imo State. At least, I have been vindicated for the fact that I said the APC candidate they were imposing on Imo people was not popular; he came from the opposition.”

Okorocha, who faulted the declaration of the candidate of the Peoples Democratic Party, Mr Emeka Ihedioha, as the governor-elect of the state, called the victory a form of “gangsterism” aided by INEC.

He added, “Now in the same way, the governorship candidate of the PDP never won that election because the election flouted Section 179 of the Constitution of the Federal Republic of Nigeria (as amended) which says that you must have the highest votes and you must have 25 per cent in two-thirds of the local government areas.

“But, even at that, we had the highest mark. The Returning Officer of INEC was never patient to even calculate to know that there was 200,000 cancelled votes where there was supposed to be a rerun. That also flouted the basic constitutional provision, which says you must have 25 per cent in two-thirds (of the local governments).”

Okorocha, who spoke with The PUNCH in Owerri, on Monday evening, said his purpose of going to the Presidential Villa, Abuja, was not to seek Buhari’s intervention over his certificate of return.

The governor, who spoke through his Special Assistant on New Media, Abasiodu Idiong, said, “Don’t forget that the governor is still the chairman of the APC governors’ forum and it is too cheapening to say that he went to Aso Rock to report the APC national chairman to President Muhammadu Buhari. For what?” – Punch

7 thoughts on “APC'll face setbacks in 2023 if Oshiomhole is not tamed: Okorocha”