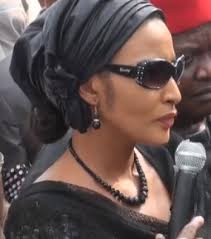 The Primary election of the All Progressive Grand Alliance, APGA in Anambra South senatorial zone in Aguata local government area of Anambra State was on Wednesday disrupted by thugs who invaded the Ekwulobia Township stadium venue of the exercise scaring away delegates

Two Aspirants, widow of late Biafran warlord, Bianca Ojukwu, Prince Nicholas Ukachukwu were the remaining contenders for the primary following the disqualification of the businessman turned politician, Ifeanyi Ubah by the screening committee.

Ubah was disqualified for his failure to obtain waiver after dumping his party, People Democratic Party, PDP less than one year ago.

The invasion of the thugs who came firing into the air led to the temporal suspension of the exercise but it took the timely intervention of the state Commissioner of Police, Garba Umar team of security men to disperse the thugs.

The security officers also released canisters of teargas and fired several gunshots to scare away the hoodlums.

Feelers have it that a certain aggrieved billionaire of the party sponsored the thug invasion to ensure the exercise didn't hold.

But, it was however learnt that the exercise was later conducted with Prince Nicholas Ukachukwu emerging winner.

Though, details of his victory is still sketchy, an inside source who spoke to News Express on condition of anonymity said that the congress may be cancelled.