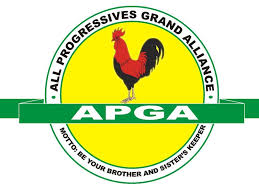 There are things we know much, there are things we know less, but knowing less or much does not matter. What matters are how one manages the much he knows and does not know, as well as how one tries to manage the milliards of unknown, the concealed, awaiting to be unveiled. It is on this realm that the unknown is mysterious, hiding all future human affairs under the aeons of the yet-to-come. And the unknown in human affairs comes to reality in natural unfolding of social dynamism. That is why Igbos say that Echi di ime (tomorrow is pregnant), and none knows what it will give birth to.

Presently, the All Progressives Congress (APC) has witnessed chains of unveiling realities, which unfold with milliards of crises, intrigues, antics and political gimmicks on daily basis. The All Progressives Grand Alliance (AGPA) in this present dispensation has run into its own crises lane. APGA is not only faced with such looming crises, but is plunged into the deadliest awaiting time bomb.

APGA in the present dispensation in Imo State has accumulated the highest number of gubernatorial aspirants. There are over 20 gubernatorial aspirants that have pinched their tents in Party. The aspirants have apex technocrats, great administrators, prominent business tycoons and celebrities, affluent capitalists and comprador bourgeoisies, dangerous grassroots politicians, etc. Now, the entrance of Gov. Ikedi Ohakim into the Party, makes the plight of APGA compounded and turned political permutations unpredictable in the Party.

It is not enough to gather, accumulate and accommodate aspirants, but to manage them afterwards. Considering the language of Nigerian politics that is highly bitter. It is not just doubtful but certain that imminent crises loom in APGA. The PDP in 2007 had very few gubernatorial aspirants and was ran off by a trailer carrying crises. The APC this year has a boom of gubernatorial aspirants, and is being crushed by the Big Crunch. Everyone turns into a fighter, none wants to be a coward and they fight to finish. This is close to the doorsteps of APGA and in multifaceted manner.

What will be the faith of APGA given the proximity of Party primaries in few weeks’ time? Each gubernatorial aspirant is bordered by the problems of to-be-or-not-to-be and the determination not to lose out. But what comes up after the intraparty clash of the titans, is something the Party leaders have not taken time to ponder and embark on perspective planning. Given the number of gubernatorial aspirants in the Party, APGA is in for intraparty showdown soonest. I see it coming with swiftness and afflictions. As a political prophet, I am being objective and prognostic in my writings; I just wish the leadership of the party will be able to handle this time bomb awaiting explosion.

What is happening in Imo APC today is exemplary and minimal sample of what awaits APGA soonest. APC is trying to manage their own crises and everybody is running into APGA for refuge and the Party is not bordered about what happens in it when after the primaries, all these people that have run to the Party did not pick the ticket?

Certainly, there will be several legal litigations, serious implosions and explosion in Party, internal turmoil and massive exodus from the Party. How can APGA handle this type of situation ahead of it, given the number of gubernatorial aspirants that have taken asylum in it? Of a truth, there has never been a time in the political history of APGA that the Party has accumulated one-quarter of elective office-seekers (electoral aspirants) as it has done for the forthcoming elections in the State.

Therefore, if the Party does not manage their intake well, there will be a serious time-bomb, awaiting to explode in APGA, and of a truth, other political parties in the State will benefit immensely in the looming crises, especially as they will be close to the dying minutes of the Party primaries.

Given the above, I humbly advise that APGA earnestly wait for the explosion by preparing existential models of crises management. But if left unmanaged and the looming crises that have gathered enough momentum close up, there will be implosions and explosions in the Party, and when it explodes, without encompassing preparations, that would be Armageddon.

Most of the gubernatorial aspirants are from Owerri zone. There are at least 15 Owerri zone gubernatorial aspirants in the Party, who include: Chief Okey Eze, Barr Steve Nwoga, and Bar Phillip Ibekwe (all from Ahiazu Mbaise). There are also Senator Bright Nwanne (Ezinihitte Mbaise), Mr Frank Nneji (Aboh Mbaise), Dr Sam Amadi (Ngor Okpala), Onyeagbako and Nick Oparandudu (Owerri North), Dr Obi Njoku and David Mbamara (Ikeduru), Humphrey Anumudu (Mbaitoli) and Uche Onyeogocha (Owerri West). This zone may have the greatest implosion and explosion. There are also some of them from Orlu zone- Daniel Kanu (Ideato North) and from Okigwe zone- Ike C. Ibeh and Chief Ikedi Ohakim (Isiala Mbano), as well as other serious gubernatorial aspirants such as David Mbara, Ziggy Azike, etc.

The experience some coaches and nations that went to the just concluded World Cup in Russia had, especially in nations like Argentina, Brazil, Portugal, Spain, etc., that have numerous classical footballers marshalled out, is enough lesson for the Imo APGA to learn. These numerous aspirants and some others yet to declare their interests are all looking up to picking the ticket, and what happens if at the end none of these prominent aspirants picked the ticket and it is given to a little known aspirant? Wouldn’t there be mass exodus and multiple litigations in the Party?

If APGA really wants to survive, the Party should be poised with agility and capability to manage their crises because as for crisis in APGA, I am seeing them in multiple, worse than APC’s and they are very inimical and imminent. Now is the rightful time for the Party leaders in the State and the national body to make bold steps to prevent the deadly waves coming fast.

Ibedc: A Crooked And Criminal Enterprise?

Embracing pain as currency of value

8 thoughts on “Apga, The Awaiting Time-bomb”