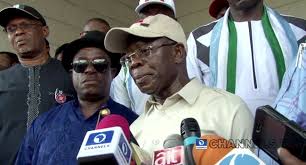 A reconstituted Court of Appeal in Abuja Monday stayed the order of the Federal Capital Territory, FCT, High Court which restrained Comrade Adams Oshiomhole from continuing in office as the National Chairman of the All Progressives Congress, APC.

The Abuja Division Appellate Court justices via an interlocutory injunction unanimously restrained security operatives from taking any steps to give effect to the ruling of Justice Danlami Senchi of the FCT High Court pending the determination of Oshiomhole’s appeal before the justices. Justice Senchi had ordered Oshiomhole to step down from his post.

The court reconvenes Thursday on the matter.