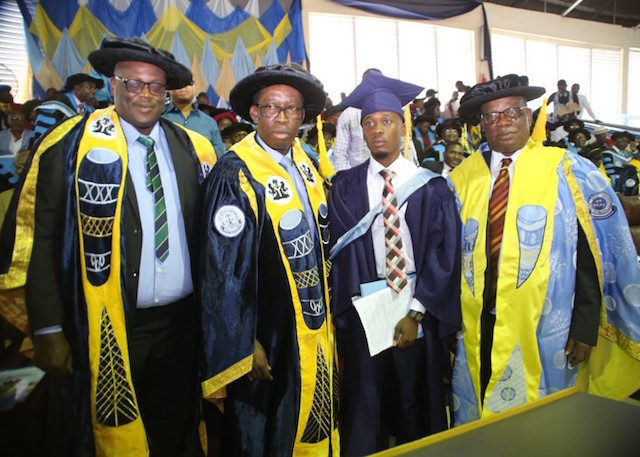 Delta State governor, Dr Ifeanyi Okowa has challenged graduates of Nigerian universities to apply the knowledge gained to create a better and fulfilling future for themselves, their families and the society.

The governor made the call Saturday in an address he delivered at the 13th convocation ceremony of the Delta State University (DELSU), Abraka where 4, 252 graduands for the 2017/2018 academics session received different academic certificates.

“Hard work, commitment and perseverance are the hallmarks and defining features of any citizen who is prepared for the challenges of our modern but fast-changing society and it is expected that graduates of our universities have to apply the same virtue as they move into the wider society where they will use the knowledge gained to create a better and fulfilling future for themselves, families and society in general,” Governor Okowa said.

He continued, “let me use this ceremony to draw the attention of everyone to the inarguably importance of education not only in the life of every individual, particularly, the youths, but also in nation building; though capital intensive, education undoubtedly, remains the bedrock for progress and sustainable development in any society; as we are aware, the global labour market is becoming more competitive and it calls for the need for universities to reinvent their curricula in line with the dictates of the times as graduates should not be seekers of employment but, employers of labour.

“This is why every responsible government would always, even in the face of economic downturns, strive to make funds available for the provision of education at all levels in the society,” Governor Okowa added, disclosing that his administration has always “carried out its responsibilities of regular and prompt payment of salaries of staff, release of subventions and provision of infrastructure within the limits of available resources.”

While congratulating the graduates of the University, Governor Okowa observed that DELSU “has proved itself worthy in its commitments to the pursuit of its core mandate of research, teaching and learning”.

“I wish to inform this gathering about the phenomenal increase in enrolment into Delta State University which is an attestation to the high number of quality academic programmes of this university that enjoy full accreditation from the National University Commission (NUC); it also depicts how highly rated our university has become thus making it a university of first choice to many candidates seeking university admission,” the Vice Chancellor stated.

The governor had before joining the convocation procession, commissioned five duplexes for Principal officers of the University.

The all time overall best graduating student of the University, Mr Abel Jonathan, an orphan with Cumulative Grade Point Average (CGPA) of 4.91 was given automatic employment by the Delta State government and given scholarship to further his studies