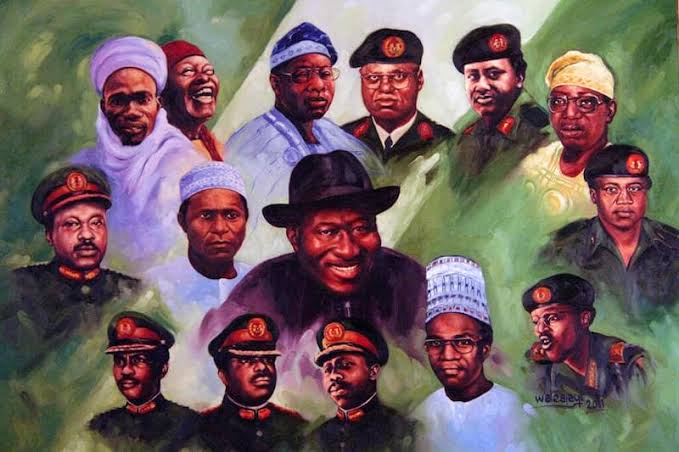 The pessimistic yearnings on new and ameliorated sitz in leben has the then bemused expression of Ayi Kwei Armah as benchmark for future critics on advents of new governments, or what Benson Omonede would call a�?Trying Another Lega�?. According to Armah, a�?in the life of the nation itself, maybe nothing really new would happen. New men would take into their hands the power to steal the nationa��s riches and to use it for their own satisfaction. That of course was to be expected. New people would use the countrya��s power to get rid of men and women who talked a language that did not flatter them. There would be nothing different in that. That would be a continuation of the Ghanaian way of lifea�?. This forms the backbone of his theses that The Beautiful Ones Are Not Yet Born, and as a simulacrum, the good leaders are not yet born. All we have are the same people- The Ugly Ones. Our yearnings for new leaders are just for trying another leg.

This ideology seems anti-change, especially with his insistence that there is no difference between all old and new leaders, a�?no difference between all the white and their apes, the lawyers and the merchants, and now the apes of the apes, our Party Men. And after their reign is over, there will be no difference then. All new men will be like the olda�?. Yet, it bears in se, optimistic inclinations that characterise human rational sociality: Desire, yearnings, cravings, dreams, aspirations, etc (all in their grandeurs). The optimistic view is powered by the African mindset that anaghi ano otu uzo eti mmonwu (masquerade does not gyrate in a place, it strides), which essence is against the saying thatold wine are tasty.

But we need to ask Ayi Kwei Armah what we should do in this circumstance. Do we just fold our hands and wait for the advent of the beautiful, the good? Or should we do away with the old fellows of our sort and specie? Perhaps, his answer might be no, because like his interlocutor, The Man said, what our leaders ought to do is to have attitudinal change, which concentrates on the commongood of the masses, and not to be backed up by the suffering masses themselves urging the erring leaders to speed up in the wrong directions like every other citizen.

Whether adjudged from the Armaha��s purview or from the lived-reality, all our leaders are the same, they are from the same ugly generation. No beautiful one is there because none has been born. The new comers in the terrain are in the same ugly generation of our rational sociality and zeitgeist. And just as Armah said, they are a�?men who know nothing about politics [who] have grown hot with ideology, thinking of the money that will come. The [retired] civil servant who hates socialism is there, singing hosanna, the poet [and novelist] is there, serving power and waiting to fill his coming paunch with crumbs. He will no doubt jump to go and shit on us. Everybody who wants speed goes there [into politics], and the only thing demanded of them is that they be good at fawning.a�?

Informed by these, the Imo case is a pitiable one. Inscriptions, calligraphy, bill-boards decorations and beautiful marks on campaign buses and posters, like orations and ovations at campaign grounds are no novelties in the Imo and Nigerian electoral stratagems. They are like the cyclic liturgical calendar of the hierarchical churches of European origin.

Inscriptions in campaigns ought to be innocuous and cryptic. My reflections since two months now have been driven to a focal point- the political inscriptions and brief campaign slogans of gubernatorial candidates, and have discovered their vagueness than cryptic or even innocuouss nature.

I wish to quote extensively on what I wrote about Chief Rochas in 2011, a�?a��youa��ll find Rochas for Governor Imo State (On a Rescue Mission!) This even is the worst. Its lack of comparative slogan shows his apprenticeship to the apex administrative political position. It shows lack of experience, neither good nor bad- a greenhorn-political aspirant. This reminds me of Ayi Kwei Armaha��s bitter regret on the calibre of political aspirants that spring up in Africa, when he wrote: a�?men who know nothing about politics, have grown hot with ideology, thinking of the money that will comea�?.


Despite his pitiable pot of inexperience, the untrained civilian is going on rescue mission in a war front. Perhaps his return, a simulacrum of the lineage vacuity created by the a�?fallen heroesa�? of the Nigerian-Biafran war whom kiths and kin gave up hopes of rejoining their fraternity after 40 years of still absence.


To rescue literary means to save somebody or something from a dangerous or harmful situation. While socio-political rescue entails first and foremost a captivity siz in leben; what Karl Jaspers called boundary situation, the extreme and poorest condition of living.


Going by this trash on the Rochasian rescue mission, an unbiased analysis must arrive at a�?Bad Governancea�� as his intentional referent. But if the democratic rule of Governor Ikedi Ohakim has degenerated to the level of this referent, perhaps to tyranny or anarchy, the organs altogether involved in the principle of checks and balances in the State would have reacted to the purported deplorable situation. Yet, up till now there has been harmonious relationship between the three arms of government in the State right from the time the Executive Arm of Government was from the minority party.


Ingratitude certainly is the arriere-plan of this evident calumny; this causes the urge to try another leg. It is an eternal truth that just as the merchants and boutique owners in the Eke Ukwu Market Owerri, will never accept selling inferior or lower-grade items to customers, no gubernatorial aspirant will accept being incompetent in trying to lead the State. But cautious scepticism must be our disposition against the imminent deceit in these enthusiastic amateurs. The governorship seat is like a vessel, which being a dockyard staff does not qualify one to pilot, and no sane Harbour Master can approve a trial sail with a preciously loaded vessel.


I am not saying that we dona��t need a rescuer. Certainly we do; perhaps, just as the Jews did, even though they hallowed and assassinated the God with them, notwithstanding his godsend status. Before one can lead he must pass through the hurdles of following, for no man can lead well when he hasna��t learnt the art of following and passed the hurdles of leadership-apprenticeship.


Every self-imposed rescuer, leader or judge surely has the possibility of answering the Mosaic question- a�?Who made you to be prince over us and judge? (Ex. 2:14)a��. Every gubernatorial rescuer in Imo State is welcomed but let the rescuer not be Prophet Hananiah to Imolites (who prophesied contrary to Prophet Jeremiaha��s words, and broke the wooden yokes of the exiled Israelites only to provoke Goda��s imposition of an iron yoke of enslavement (Jer. 28:1-17). Rochasa�� rescue mission is pre-emptively Hananian.


All over the world, and in the present day democracy, nowhere have giants and the richest ruled. The most affluent do not rule instead they sponsor those with leadership charisma- the Philosopher Kings. Aliyu Dangote is a million times richer than Rochas Okorocha, yet he maintains his huge height in the field of life where he excels and is gifted. That Owelle Rochas Okorocha is a renowned philanthropist is an adorable reality but that his philantropism is the criterion to govern Imo State is pure fallacy. If philantropism gives such qualifications, St JohnBosco, Blessed Luigi Guanella, Blessed Chiara Bossata, Blessed Thomas M aria Fusco and Blessed Mother Theresa of Calcutta, to mention but a few renowned, top-notch and world-class philanthropists of our zeitgeist, would have become Presidents of their countries, Roman Catholic Bishops and Popes or Heads of the Vatican Nation-City.


Mother Thereasa of Calcutta of the blessed memory travelled all over the world without visa and flight fees but her holiness, charity-charisma and philantropism did not make her consecrate Holy Communion for Catholics or assume clergy. Philantropism like holiness is different from a Statea��s apex leadership position (or the priesthood). While the occupier of the Governorship Seat can tomorrow turn a philanthropist, if he so desires, the philanthropist can never have such smooth personality-transmutation to the Governora��s seat.


But let me ask, is Rochas that beautiful one who is to be born? No! He is even the ugliest. But a good start from the lower cadre of elective leadership position certainly gives his palpable neophyte status a balanced swift sail and possible landslide victory in an apex leadership position like the one he is now eyeing or the Upper Chamber of the National Assembly. Certainly, he will be a good prospective gubernatorial candidate and possible-winner of the seat in Imo State after passing through lower leadership cadres for apprenticeship. But, who does not eye heaven? Everyone desires heaven, even sinners, the atrocious and the depraved do. Recently Rochas apologized to Imo people over his ugly comment of condescending so low to rule Imo.We all know that it was his arrogance that made him lost 1999 chance of being a governor. Is unfortunate that in this twenty-first century Rochas has promised restoring Okada if he wins, dissolve and probe LG council, re-conduct LG polls, review the so-called 10,000 jobs as government cana��t afford to pay to mention but a few. Imo people shine your eyesa��!

Fr Mbaka and his forced donations

7 thoughts on “Are All Our Leaders The Same ?”