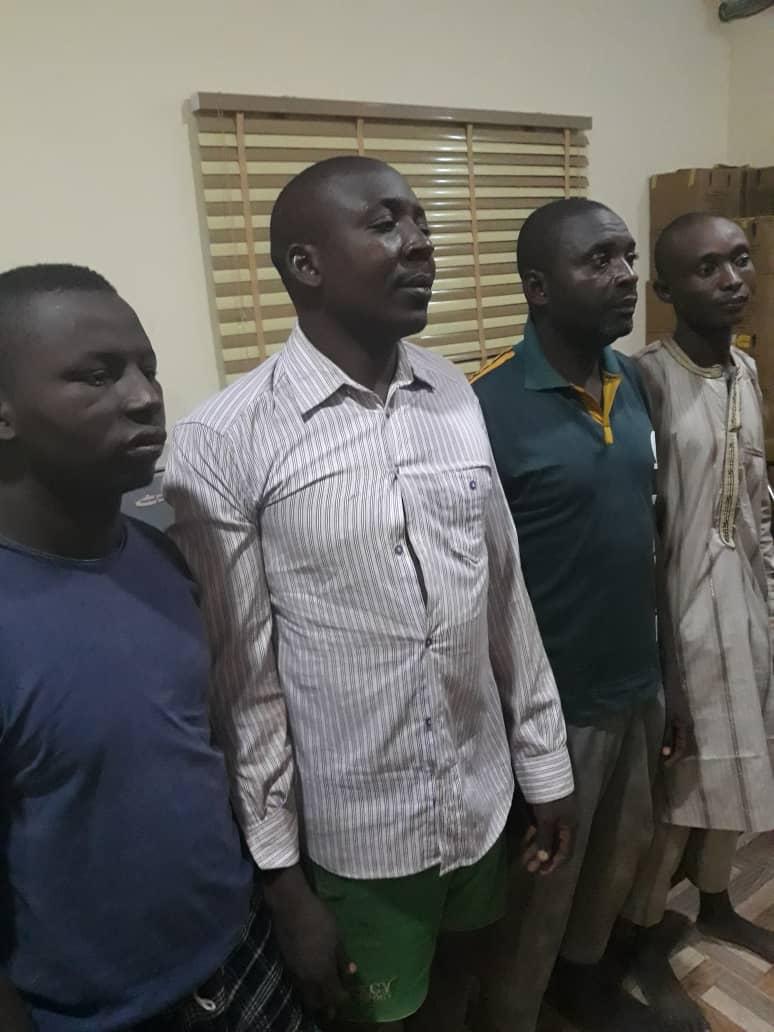 The Nigeria Police Intelligence Response Team IRT have uncovered how terrorist groups/Bandits in Nigeria fund their organizations and procure arms from Libya to destabilize the country. The intricate terrorist network was uncovered by a crop of detectives attached to the Inspector-General Special Intelligence Response Team (IRT) led by Deputy Commissioner of Police, DCP Abba Kyari. The police are also theorizing that arms running deals were partly the cause of the bloodbath that had enveloped Zamfara State for long. Hundreds of people have been killed within Tsafe, Zurmi, Shinkafi, Maradun, Maru and Brinin-Magaji local government areas of Zamfara State, leaving many others displaced. The terrorists’ arms running and source of funding were discovered after 12 bandits, who participated in the October 2018 kidnapping of twin sisters, Hassana and Hussaina Bala were arrested. The twin sisters were abducted in Dauran village in Zurmi Local Government Area of Zamfara State, where they went to distribute their wedding invitation.

A ransom of N15million was paid before the girls were released. One of the suspects arrested in connection with the abduction, Nafiu Usman, alias Baba Doctor, a top commander of a group of bandits operating in Zurmi, made startling confessions. In his confessions, Usman revealed how his boss, Dankarimi, who command all bandits within Zurmi Local Government Area, had been procuring arms and getting funds. For long, Zamfara State has become a war zone, with people being killed everyone. This forced the police hierarchy to deploy selected Special teams of police to the area, including operatives of IRT.

The operatives disclosed that investigations have shown that the top grade military arms and ammunition, which were used in most of the killings in Zamfara State were bought in from Libya. “ These suspects and their partners are into high profile kidnappings and armed robbery. They also get large chunk of their funds from proceeds of cattle rustling.

The rustled cows are supplied to cattle dealers at the Abattoir Market in Agege, Lagos State as the cattle were Sent to Lagos from Zamfara using long trailer trucks by the Bandits. “When these funds are remitted back to the bandits in Zamfara State, it will be swiftly moved into Agadez Region of Niger Republic, where it will be used to procure heavy arms including anti-aircraft guns and rocket-propelled grenade launchers, from black markets in Libya.”

It was further disclosed that the arms, which were usually smuggled into Zamfara State, through Niger Republic border, had been used several times to attack and kill security operatives. The source further disclosed: “Baba Doctor, who is a sub commander with over 300 boys, mostly from Niger Republic, confessed that his group, headed by Dankarimi was behind the kidnapping of the twin sisters.

“He said that the N15million received was shared among commanders working for Dankarimi. Baba Doctor got N500, 000, which he shared with his boys. He also confessed that his group ambushed and killed a team of soldiers on patrol at the Doburu Forest on December 29, 2018. They attacked the soldiers with rocket propelled grenade. According to him, they bought the weapons from Libya through Niger Republic. He identified one ‘Alhaji Naira’ equally Arrested by IRT as the person who used to provide the funds use in buying arms.” Baba Doctor narrated that all subcommanders of Dankarimi, who he said live in forest, go around town rustling cows, which they later hand over to Alhaji Naira. Naira in turn sends the cows to waiting buyers in Agege Abattoir Market in Lagos State. After killing and selling the cows, the money goes back to Dankarimi through Naira. After his arrest, Baba Doctor led IRT operatives to arrest Naira, who then revealed the names of four of their receivers in Lagos State known as

1) Alhaji Ago Atine,
2) Alawani Abubakar,
3) Mohammed Shagari and
4) Bashiru Aliyu.
“They were arrested by IRT Operatives led by DCP Kyari in lagos while they were selling some of the buttered cows, which were rustled in Zamfara State,” The suspects, All Natives of Zamfara State, admitted to have bought over 2000 cows from bandits within the space of one year. The suspects admitted knowing that the cows were stolen.

I sell for N170, 000 and 180,000, depending on the size. I receive cows weekly, and after selling them, I send money into Alhaji Naira’s account. I don’t know what Alhaji does with the money. I know the cows were stolen from their owners in Zamfara State.