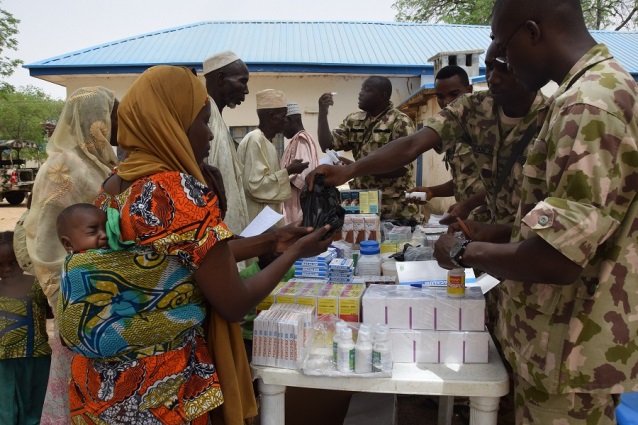 According to him, the free medical outreach was held as part of the activities lined up by the Nigerian army to mark the 2018 NADCEL with a view to strengthen the existing military-relations in the state and north east at large in the wake of the fight against the boko Haram insurgency.

He also said that the medical outreach will be held for two days, Tuesday and Wednesday, 3-4 July 2018 for the people to be able to come over for free check ups and free drugs as well as free laboratory and medical tests by the Nigerian army medical corps personnel.

The COAS urged the IDPs and residents of the host communities to avail themselves with the opportunity to have free access to medical services to cushion their medical and health sufferings while commending the organisers of the medical outreach for a job well done.

He further appreciated the support of the President and other governments as well as organizations that assisted the Nigerian Army in one way or the other in the fight against insurgency while soliciting for the support and cooperation of the people in the remaining task of clearance of the remnants of the boko haram insurgents.

Buratai noted that without the support of the people, the military could be able to achieve any remarkable success in its mission while assuring that, the Nigerian military personnel were highly motivated and have adequate equipments to handle the task and capable of ending the insurgency as all operations were in full force to end the insurgency.

He pledged that all the IDPs will soon return to their respective communities to continue their farming, fishing and cattle rearing activities at the extreme northern part of the state and other parts of the north east with the introduction of additional operation tagged, operation last hold which has headquarters in Monguno and Major General Abba Dikko as its Commander.

Earlier, the COAS visited the 7 Division Nigerian Army, Maimalari Cantonment Maiduguri hospital and medical service center to sympathise with the soldiers receiving treatment who sustained injuries during the boko Haram insurgency as part of the NADCEL week 2018 activities.

He assured the soldiers that the Nigerian Army will continue to support and provide them with all the necessary requirements towards their quick recovery while commending them for their bravery and sacrifices to their fatherland.

General Buratai said they were not alone as the Nigerian army is with them always and will continue to assist them and ensure their recovery, noting that, their sacrifices will not be in vein.