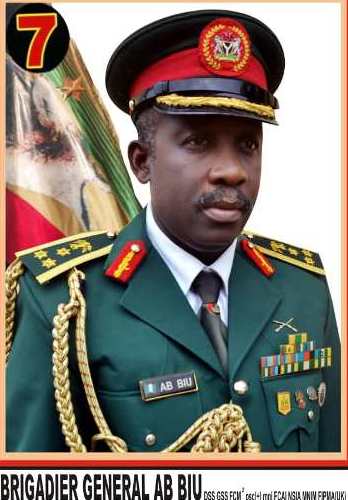 Members of various Associations operating in Borno State have been urged to cooperate with the Nigerian Army through sharing of vital information that will assist its operation in the North East.

The Acting General Officer Commanding (GOC) 7 Division, Brigadier General Abdulmalik Bulama Biu gave the charge yesterdayTuesday during courtesy visits to his office by some Associations in the State.

A statement issued by Colonel Kingsley Samuel, DDAPR, 7 Division, Nigerian Army Maiduguri said he also stated that as critical stakeholders their collaboration is vital towards ending the insurgency.

The first to call on the GOC were members of the Fish Producers Association led by its Chairman, Alhaji Abacha Mandalam.

Speaking during the visit, the Chairman said they were in the Division to thank the GOC for providing adequate security for the state which led to the enhancement of their business.

He assured the GOC of their support in any form that will be required to aid the operations within the Division's Area of Responsibility.

He congratulated the GOC for his recent appointment, adding that RTEAN as a duly registered Association charged with responsibility of loading and offloading of goods and passengers as well as operate, control and supervise services of motor parks and bus stops throughout the federation.

The Chairman pointed out that, they were in his office to enhance already existing cordial relationship between the Association and Nigerian Army.

Also, Members of the Nigerian Legion paid courtesy call on the GOC led by Assistant Commandant General of the Council, William Mamza who said they were in his office to congratulate him on his recent appointment as the GOC, assuring him of the Association’s support through information sharing in the ongoing operation in the North East.

He said the Radio station funded by International development partners aimed at promoting peace building in the Lake Chad and North East and also a platform to discuss homegrown solutions to the security crises in the region.

Responding, the Acting General Officer Commanding assured them of the Division's support in the pursuit of their legitimate businesses through provision of adequate security while calling on them to come forward with relevant information that will aid security operatives in the area.

Living Among the Dead (3)