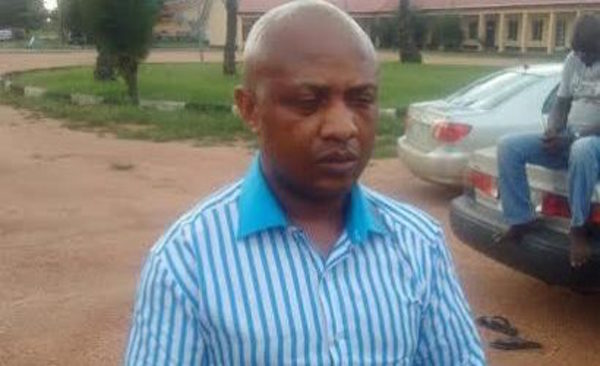 Glimpses about the lavish lifestyle of the billionaire kidnapper Evans are emerging, with his confession that he splashed his loot in buying a wristwatch for $170,000.

He also bought three phones for $6000 each and bought two houses in highbrow Magodo Estate in Lagos and another house in Ghana.

Evans was arrested in one of the houses in Lagos on Saturday, after eluding police radar for five years.

The Nation in a report today said Evans real name is  Chukwudubem Onwuamadike. He is from Umudim, Nnewi  in Anambra state.

He was arrested at his Magodo residence around 1pm by operatives of the Inspector General of Police’ (IGP) Intelligence Response Team (IRT).

It was gathered that the operatives got intelligence Evans was hiding in his Magodo mansion where he was surrounded.

The suspect was said to have run to the roof of the house for emergency exit but the policemen caught up with him.

In the course of his arrest, he slammed the door against the operatives and injured a policeman.

It was gathered that four AK47 rifles and over 50 magazines were recovered from the house.

Inspector General of Police Ibrahim Idris had announced N30million bounty for anyone with useful information that could lead to the arrest of Evans.

Evans, security forces said, has been responsible for many high profile kidnapping in the southwest, south south and south eastern parts of the country.

Evans was said to be a brilliant criminal, who has given security forces sleepless nights.

He was said to have collected billions of naira as ransom from his victims, including expatriates, business moguls and public office holders.

A police source, who hinted on the arrest, said Idris deployed all resources at the Force’ disposal in the hunt for Evans.

He said their focus in the last one month had been to catch Evans alive so that Nigerians can have peace.

On how the suspect was arrested, the source: “Someone called and gave information on his whereabouts. When we got there, he hid inside the roof of the house. He could not withstand the pressure on him from the police.

Contacted, the police spokesman, Jimoh Moshood, a Chief Superintendent (CSP) said the suspect would be paraded this afternoon.

The suspect told police investigators he had two houses in Magodo, which he brought for N130million and N70million.

Claiming to have been in the kidnapping business for 10 years, Evans also confessed to have two four bedroom houses in Ghana.

The kidnap kingpin said he sent his wife away when he realised the police were closing in on him.

He said he once relocated to Ghana and was planning to travel abroad before he was caught.

The suspect is currently being interrogated by the police. NAN