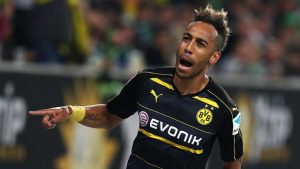 Pierre-Emerick Aubameyang is edging closer to becoming an Arsenal player.

Multiple outlets ( including the Daily Telegraph ) are reporting that a $77.9 million deal between Arsenal and Borussia Dortmund has been agreed, which would make Aubameyang the most expensive signing in the Gunners’ history.

The Gabonese striker will also become the highest-paid player at Arsenal, with reports stating his wages will be in-excess of $250,000 per week on a deal which will run until the summer of 2021.

Arsenal’s representatives have been in talks with Dortmund officials since last week and it appears they have now reached a deal which will see the reigning Bundesliga top scorer head to the Emirates Stadium. Aubameyang has scored 141 goals in 213 appearances for Dortmund and his arrival will severely soften the blow of Alexis Sanchez leaving for Manchester United last week.

Aubameyang was due at a court hearing in Dortmund on Monday to give evidence in the Dortmund bus attack from last year but he didn’t turn up with reports saying he had flu. Aubameyang did play for Dortmund on Saturday in their draw against Freiburg but was booed by sections of the Dortmund fans at the Westfalenstadion.

When it comes to Dortmund replacing their leading goalscorer, it is believed the Bundesliga club were keen on  Olivier Giroud  being part of the deal but the Frenchman is said to not want to leave London and now a loan move to Chelsea could be lined up as he aims to play more regularly to get into the France squad for the 2018 World Cup in Russia.

Giroud, 31, almost joined Everton in the summer but with Chelsea aiming to bring in a target forward all January, he could well get his wish to remain in London and play a more pivotal role than he currently is at Arsenal.

To complete this transfer merry-go-round current Chelsea striker  Michy Batshuayi , who scored twice in the FA Cup win over Newcastle on Sunday, is said to be heading to Dortmund to replace Aubameyang.

German outlet Bild says  that Batshuayi will arrive at the Westfalenstadion on loan with the Belgian out of favor under  Antonio Conte , but still managing to score 10 goals in all competitions this season for the Blues. Sevilla and Anderlecht have also been linked with a move for Batshuayi who arrived in the summer of 2016 but has found opportunities hard to come by behind  Diego Costa  and Alvaro Morata over the past 12 months.

Who are the big winners here? You have to say Arsenal.

At the start of January if you would have told Arsenal’s fans that they would get  Henrikh Mkhitaryan  and Pierre-Emerick Aubameyang in, lose Alexis Sanchez and spend $77.9 million, I think they would be delighted with those deals.

Aubameyang is a proven goalscorer in the Bundesliga and European competitions and he seems to be the mobile target forward that Arsenal have wanted. With  Alexandre Lacazette  to play off him and the likes of Mesut Ozil and Mkhitaryan creating chances, all of a sudden Arsenal’s top four chances have been given a huge boost with  Arsene Wenger ‘s side five points off the top four.