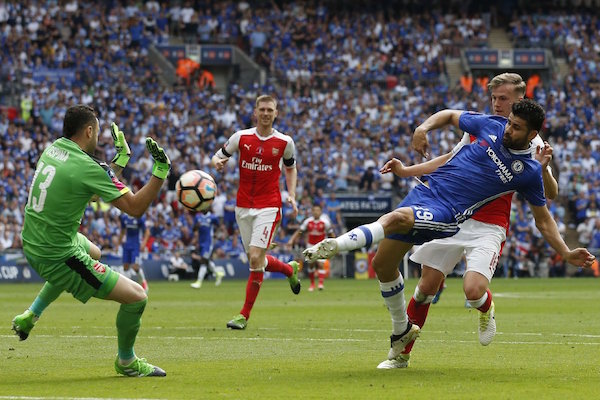 Wenger became the competition’s most successful manager with a seventh title in his 21-year reign, triumphs that have papered over some of the cracks as Arsenal has repeatedly come up short in the Premier League and Champions League.

Just as the season reached its climax at Wembley Stadium, Arsenal turned in the type of tenacious display lacking so often, and against a side so commanding in the Premier League. And it might just be enough to stem the tide of protests against Wenger, with the record 13-time FA Cup winners yet to announce a new contract for the 67-year-old Frenchman for next season.

The good fortune Arsenal have desperately needed came in front of almost 90,000 fans at the cup final.

When Alexis Sanchez put the ball in the net after four minutes, it was initially disallowed when Aaron Ramsey was adjudged to be interfering with play while offside. But the decision by Anthony Taylor’s assistant was overturned by the referee.

Arsenal even had the luxury of a man advantage from the 68th minute when Victor Moses received a second yellow card for diving.

Although Diego Costa equalized in the 76th, bringing down Willian’s lofted ball on his chest and striking past David Ospina, Arsenal was back in front inside three minutes.

Ramsey was left unmarked to meet Olivier Giroud’s dinked pass by N’Golo Kante, who uncharacteristically failed to track the midfielder. And just like in 2014, Ramsey was Arsenal’s cup final match-winner.

Arsenal heads into an uncertain offseason, with the club out of the Champions League next season after a fifth-place finish in the Premier League.