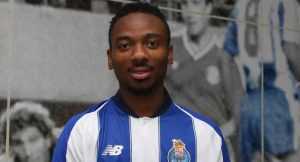 Nwakali, 20, has yet to break into the Arsenal team since moving to the Premier League club in 2016.

He was sent on loan to Dutch side MVV Maastricht for the 2016-17 season and returned to Holland for a loan spell at VVV Venlo last term.

“Kelechi Nwakali will spend next season on loan with Portuguese side FC Porto. The deal is subject to the completion of regulatory processes,” Arsenal said on Thursday.

Nwakali has played once for Nigeria’s senior team after captaining his country to victory at the Under-17 World Cup in 2015.

Speaking to the Porto website, Nwakali added: “My main goal is to develop, improve my qualities and the other aspects I know I need to correct to grow in the way I play,” he said.

“I think FC Porto is the right place to evolve as a player. There are good players, young people, and I think I’ll grow up here.”

Arsenal are also reported to be on the verge of finalising a deal for 16-year-old left-back Joel Lopez, who recently made it clear he would be leaving Barcelona.

How a 'drunk' Neymar tried to rape me in hotel –accuser; it's not true: Neymar