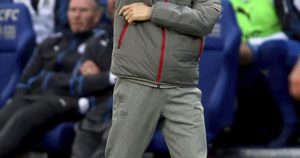 Arsene Wenger will end his tenure at Arsenal without an away point in the Premier League in 2018 after his team lost 3-1 at Leicester on Wednesday.

It was the seventh straight loss on the road for Arsenal since the turn of the year, an embarrassing statistic for Wenger at the culmination of his reign of 22 years. Arsenal last had such a run of defeats in 1966.

Arsenal played with 10 men from the 15th minute at King Power Stadium after center back Konstantinos Mavropanos was given a straight red card for hauling back Kelechi Iheanacho, who had put Leicester ahead a minute earlier.

Pierre-Emerick Aubameyang equalized in the 53rd for Arsenal, but Jamie Vardy regained the lead for Leicester by converting a 76th-minute penalty and Riyad Mahrez made the points safe with a goal in injury time.

Wenger’s final game in charge of Arsenal is against Huddersfield on Sunday.