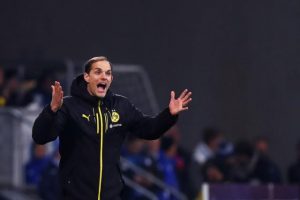 From Esquire
German newspaper Kicker has reported that former Borussia Dortmund boss Thomas Tuchel will take over at Arsenal this summer.

The 44-year-old German would follow a number of senior hires that have arrived in recent years and loosened Arsene Wenger’s iron-grip on the North London club.

While Wenger is determined to fulfil his contract, which runs until 2020, it is thought that even a Europa Cup win will not save the 68-year-old Frenchman from an early exit.

Tuchela��s potential appointment doesn’t come without controversy. He famously fell out with Arsenal’s Head of Recruitment, Sven Mislintat, during their time at Dortmund.

A power struggle over transfer targets and recruitment became so toxic that Tuchel eventually banned Mislintat from the training ground.

It was one of the reasons why Mislintat joined Arsenal after a decade at the German club, and he soon proved instrumental in attracting Pierre-Emerick Aubameyang and Henrikh Mkjitaryan to the Emirates a�� two players he had previously scouted and brought to Dortmund.

Despite reportedly rejecting Bayern Munich for the role, Arsenal fans aren’t too keen on the potential appointment a�� and the drama it could bring.

Morata v Lukaku: Who has been more impressive so far this season?