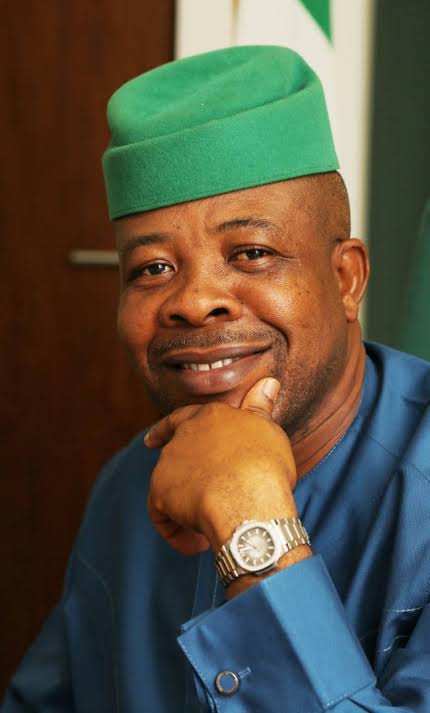 I read an article in Horn Newspaper of 7th November, 2019 titled, Kenneth Uwadi, between activism and blogmail written by Mr. Steve Osuji. Osuji is Specail Adviser on Media to Governor Ihedioha . In the said article , he called me names, tickled himself and laughed. Such article filled with name calling without addressing the issues I raised, coming from a media adviser to a governor is laughable and an exercise in self-deceit.

I can see why Osuji performed woefully as media person to Dr Ikedi Ohakim when the man of Burma Estate was governor . I can also see why Imo State Newspapers ( Statesman) collapsed when Osuji was managing director. You can guess the kind of advice he is currently giving the governor of my state. It is stated that the odour that oozes out from the male goat is not from the skin, otherwise, water could have washed it away. May Imo be free from ‘ganjaweed’ advisers.

I have no hidden agenda. As a former coordinator of Youths Against Human Rights Violations and Corrupt Practices and current president of Youths for Human Rights Protection and Transparency Initiative, I have this consistent interest in the welfare of my state. Few persons may not appreciate what I do for the overall good of the state but for a man to find time to speak against anti- people, anti- poor policies in his state and be calling for things to be done right for several years now is laudable.

I will never be tired of demanding that government sould chasten itself and give Imolites the foundation and the example to propel forward. I will continue to demand that government should deal honestly with the people and be level with them. We must have accountability and transparency that we are not getting now.

If any administration is turning evil we should spare no efforts and no sacrifice to speak up and fight them. The pen is mightier than the sword . If anyone thinks he can cow me and whip me into false line with names like blackmailer, blogmailer, joblessman and with threats of arrest or jail so as to endorse his cluelessness, such person must have his brain examined. I will not be intimidated. My position is also the position of most Imolites in diaspora who are only asking for a reasonable government that would be sensitive to the needs of the state so that they can come back home to contribute in making our state great.

As things stand in Imo, it is becoming clearer that the state is currently in the hands of the gods. Ihedioha has excelled more in the art of creating meaningless crisis than in governance.Government critics are now tagged criminals and traditional rulers forced to pour libation and curse them.

My friend Odom said ‘ Mbaise traditional rulers last week gathered at Ahiara Junction, bought hot drinks with plastic disposable cups and cursed those who criticized the governor.” That’s the state of cluelessness currently in Imo. The other day Sam Onwuemedo was banished from his community for criticizing the governor. Uche Nwosu too was not spared by a traditional ruler in Owerri who was forced to make caricature of him.

Some persons are taking the State to the cleaners in just six months under dubious guises. The uncensored looting of the Imo council treasury under very phony 27 stadia projects with the collaboration of the hand-picked Imo council sole administrators is a thing of concern. The Governor sacked elected local government chairmen and councilors and promised to conduct council elections in December 2019 but has reneged on this promise. When are we conducting council elections in Imo?

My state governor is doing little or nothing to create wealth but is running a huge con game in the 27 LGA’s of the state via Caretaker Committee Chairmen. Our LGA funds are held hostage and we are deprived the opportunity to function democratically. Nigeria’s Constitution recognizes LGA’s as the third tier of government after the federal and state government. Their functions are clearly defined. They are entitled allocation of funds from the federation account for use in carrying out their functions.

Each of Imo State LGA’s receives millions of naira in allocations. Where is the money? Nobody knows where these monies end up. Do we hope to see any local roads, health care centres, modern schools and markets in our LGA’s since Ali Baba and his 27 council thieves are wrecking our councils dry?. Are we going to see meaningful projects to speed up development in our councils? Where are the millions of naira for Imo LGA’s since June 2019? ASk them they will tell you they are building 27 stadia .

Ihedioha and his Caretaker Committee Chairmen are looting these monies in the name of stadia. They are using local government revenue and allocations to enrich themselves . This is a man who condemned the former governor of the state for putting up uncompleted white elephant structures called hospitals.

How can we move forward in Imo when the Governor is holding our Local Government to ransom and taking merchandise of their allocation. He does not want elected Council men because he cannot face the prospect of losing his council juice that he has been leaking from since June 2019.

In just 6 months Imo state is now like a war zone. The teachers are suffering. The civil servants are suffering. Business men are suffering. Even the traders are suffering. Task force harassing Imolites here and there. This man is bereft of any idea of how to rule or move the state forward. What we have now in Imo State is the more you look the less you see. They have run out of ideas completely in just six months or at least they are not even trying to implement the decisions that must be made in order to achieve that which they desire . Shaking my head

What Pmb, Oshiomhole Should Do To Help Taraba Apc