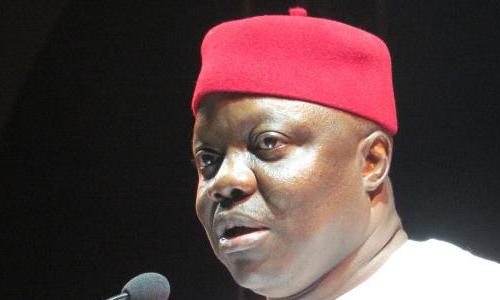 Immediate-past governor of Delta State and All Progressives Congress 2019 Delta South senatorial candidate, Dr. Emmanuel Eweta Uduaghan, has opened up on the downgrade of the Asaba International Airport by the Nigeria Civil Aviation Authority (NCAA), few days to his exit as the governor of the oil-rich state in 2015.

The Nigerian government through the NCAA had downgraded the Asaba airport over the failure of Delta State government to put in place safety and security measures at the airport. The development temporarily shut down the operation of the airport as only Dash 8-Q 400 aircraft or its equivalent were allowed in.

But speaking recently in an interview with TELL Magazine, the Itsekiri-born medical doctor revealed that the poor remarks of the airport by the NCAA were politically motivated stressing that it was a regional power-play and blackmail by some aggrieved persons in the state.

In his words: “What they are celebrating as first international flight, what plane was used? A Boeing – 737 – which had been coming in. By the time I was leaving, we had had over 130,000 passengers pass through that airport; some coming with Boeing 737, and smaller planes. There is no president, past president, current president alive today, and very prominent Nigerians that has not passed through that airport and did not have good testimonies about that airport. The airport ran smoothly for three years; there was no issue.

“Then we started having challenges with the run-way, which we started to look at. And it’s not new. Enugu airport was resurfaced last year; they are already having challenges with the runway. Go and check Enugu records; the last visit of governors of the Southeast to Mr. President was to complain about the runway in Enugu airport. And this was a runway that was rehabilitated, first before we left, then done again when I had left office. The same company which they recommended to us that should do the Asaba airport, rehabilitated Enugu airport in the last six years twice and still has problems. Abuja airport has problems – runway. Runway problem is not something new, just that they turned this one into politics.

“First, it was announced by the ministry; the ministry had no business announcing it. It’s the business of the FCAA. Some people lobbied the ministry to down-grade it so that I can panic and pump in money and finish it quickly. The same people at that time just felt upset that I had started the Osubi airport runway construction; I had paid some deposit to the company, and their own was that the deposit I had paid for the Osubi airport runway, why would I not use it to complete the Asaba Airport.

“So, there was a regional power-play and blackmail. I am going to mention names in the future, especially for the Osubi airport. We were given a temporary approval by the ministry to commence construction while lobbying for the permanent approval by the FCAA; so, we did not just go there anyhow. The minister came; he went to the place. They gave us temporary go-ahead to do it.

“Of course, ministers were changed. A new minister came in – Osita Chidoka – he was supposed to be my friend; he’s still my friend till today. But when he became minister, he was a little bit hostile. So, I was looking for him; I couldn’t locate him until we were having one rally. I said look, honourable minister, I have been trying to reach you. Can we meet over the airports in Delta? He said fine.

“I went to his office; I was in his office for over four hours discussing the two airports and he said Osubi must stop work. I said why? That we can’t have two airports together like that. For two years, I tried to take over the Osubi airport so that I could increase the length of the runway. You know it was built by Shell, and it was being run by Shell. Shell dribbled us for two years; it was eventually they opened-up to me that they would never give it out because it would affect their operations. I said all these two years, why not say it? So, when they eventually agreed to give it to us that we could do what we had in mind to do, but that we should not touch the short runway, I said okay, available land space, give it to us so that we would do a longer runway; airports don’t have only one runway. Some have three, four. Shell said no. So, that meant we cannot even have land.

“It got to a point when I said okay, I was going to revoke the land; carry your airport away; I will revoke the land. It was then they agreed to cede part of that available land space to us. Then, we acquired more from the communities to get enough land to be able to construct the second runway. So, we started the second one.”

The former governor further revealed that they had cleared, excavated, sand-filled and “work was going on when Chidoka said no, we cannot continue; that there are two airports. I told him no; I appealed to him, but we continued with our construction. He now sent people to come and stop the contractors. Of course, because they were contractors also doing federal jobs, they were afraid to continue in order not to be black-listed. So, that is what happened to Osubi airport hoping that they would force me to go to Asaba airport. But I told them that Asaba airport wasn’t abandoned; we were just having challenges with who the consultant would be.

“FCAA succeeded in forcing a consultant on us. The consultant that eventually did the job was not our consultant; it was nominated by the FCAA officials and they also wanted to force a contractor on us and we said no, that we had our own contractor, let him continue. Fortunately, the contractor that they wanted to force on us was the same contractor that handled the Enugu airport which again failed, so you can’t say he was so good a contractor. So, we had all those challenges. That is part story of the Asaba airport; the full story will come out.”

“They raised the issue of perimeter-fencing, about 70 per cent of which we had done; but before you wake up, Onitsha people had come to cut them, and they took them to go and sell. So, we had to increase security around the place.

“Then the issue of FA lighting so that planes can land at night; we installed FA lighting twice and they would come from across the Niger to steal them away. At the time they closed the airport, the memo had gone through exco, the contract had been awarded for the resurfacing of the runway. They were just waiting for mobilization. So, that statement wasn’t correct.

“The issues they raised, we tackled. And that airport is the most comprehensive airport in Nigeria. I challenge anybody; let us go and debate it. It was just purely regional and ethnic politics that they were doing with the airport. And for me, I am so happy because the point is, I have more people commending me for the airport from that Delta North, prominent sons, than the few persons that were playing politics. I have letters from the Asagba commending me for the airport and some of the things I did in Asaba. So, I am very happy and proud that I made it possible for Asaba to have an airport”