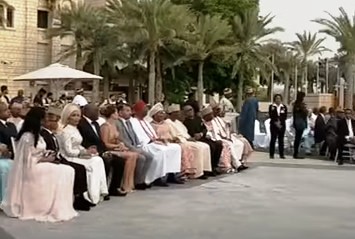 Pro-democracy advocacy group, the Centre for Good Governance and Accountable Leadership Initiative (CEGGAL Initiative) has reacted to the ongoing rumour in the social media that former vice President Atiku Abubakar got married in Dubai last Saturday to a new wife and paid $1, 000, 000 as dowry.

The Centre, in a statement issued on Thursday by its Executive President, Chief Willy Ezugwu, described the allegation as a�?unfounded, demonic, lacking any iota of truth, and a cheap blackmail.a�?

According to Chief Ezugwu, who was also a guest at the wedding in Dubai, a�?It was Alhaji Atikua��s step son, Mr Anthony Douglas who wedded former Miss Whitney Woods at a Church wedding ceremony last Saturday, not the former vice President and so $1, 000, 000 dowry payment does not arise.

a�?The video of the purported a�?marriage dancea�? between Alhaji Atiku and his wife was Anthonya��s mother, Mrs Jamilah Nkoli Atiku Abubakar from Onitsha in Anambra State, who has been married to the former vice president for over a decade.

a�?As a Muslim, Alhaji Atiku Abubakar by his religious faith is entitled to four wives and there would have been nothing wrong with him taking a wife if he so desired.

a�?It is obvious that the allegation is unfounded, demonic, lacking any iota of truth, and a cheap blackmail meant to achieve political purposea�?, the Centre said.

The statement added that a�?Atiku Abubakara��s large heart and his maturity should be celebrated for giving his step son equal treatment with his biological children, a plus to his outstanding leadership qualities.a�?