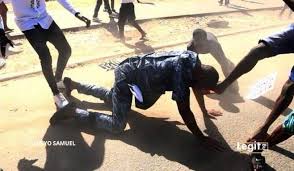 Adeyanju was attacked on Tuesday during a protest in front of the headquarters of the National Human Rights Commission.

The protest was staged to canvass for obedience to a court order by the Buhari administration.

Pictures and videos posted on Twitter show hoodlums, and counter-protesters descending on him and beating him to stupor.

Some commentators on Twitter claimed that the police watched the attack without making any effort to protect Adeyanju.

Reacting to the attack on Monday night, Atiku wrote on Twitter: “Like I said before, without rule of law, there can be no rule at all. Govt must be seen to be working to protect those who hold contrary views. As such, perpetrators of the brutality against the activist, Deji Adeyanju must be brought to book. Their act stands condemned

The attack happened despite the presence of policemen who were unable to manage the situation.

The activists had gathered at the National Human Rights Commission headquarters in Maitama, Abuja, to present a letter to the Executive Secretary of the commission when they were attacked by the hoodlums who were carrying a large banner with the inscription, ‘Support Buhari, say no to saboteurs.’

The coalition members were singing and wielding placards with inscriptions such as ‘Stop silencing dissenting voices,’ ‘Save our democracy,’ and ‘NHRC must protect our rights,’ when the pro-government group emerged from one of the streets and disrupted the rally, shouting ‘Sai Baba’ and praising the President, Major General Muhammadu Buhari (retd.).

A few minutes later, they attacked the activists and journalists who scampered for safety.

The men pounced on one of the coalition leaders, Deji Adeyanju, and two other members and assaulted them with sticks and other objects.

The men sustained some injuries and were subsequently taken to an unidentified hospital for treatment.

The police team arrested one of the unruly elements and gave him a few slaps.

The convener, Free Nigeria Movement, Ralph Adebayo, described the attack as unfortunate and “a sign of things to come in 2020.”

He said the attackers were sponsored by the government, stressing that Nigerians must defend their constitutional rights and save democracy in the country.

Adebayo stated, “What happened today (Monday) is a tip of the iceberg; it is a sign of things to come in 2020. Everybody should brace up for the battle to save and defend democracy in Nigeria.

“This is not a battle for activists alone, but for every citizen to defend their constitutional rights. What happened is very sad and unfortunate. The police were standing by watching the miscreants attacking us. This incident should be investigated by the police authorities,” he insisted.

But Ibrahim Dala, who led the suspected miscreants, denied ordering his cohorts to attack the coalition members, noting that the assault was in reaction to the verbal insults from the activists.

Dala, who described himself as the co-convener of the Centre for Leadership and Development Initiatives, said, “We would not allow foreign mercenaries and opposition to come and sabotage the government of President Muhammadu Buhari.”

He noted, “We are here in solidarity with the military for what they are doing in combating Boko Haram, banditry and other forms of insecurity. Nobody asked anybody to be violent; it (the attack) happened because they (the activists) were insulting our people and they also have the right to protest, they are Nigerians.”

The PDP in a statement by its Publicity Secretary, Kola Ologbondiyan condemned the attack on the activists.

I Want My Respect Back, Not Belt, Says Anthony Joshua

8 thoughts on “Atiku Condemns Attack On Deji Adeyanju In Abuja”