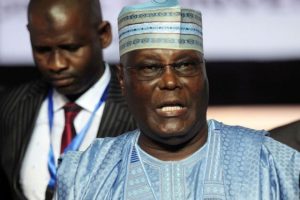 ABUJA (Reuters) – Nigeria’s main opposition candidate Atiku Abubakar said on Monday he will boost oil sector investment, cut costly fuel subsidies and double the size of the economy by 2025 if he wins next year’s presidential election.

The businessman and former vice president portrayed himself as a champion of the private sector as he released his manifesto and set out his plans to stop incumbent Muhammadu Buhari securing a second term in February.

There are few reliable opinion polls in Nigeria, Africa’s largest oil producer. But Abubakar is seen as a substantial challenger to Buhari, a former military leader who has suffered a run of defections, overseen a stumbling economy and struggled to contain militant violence in the northeast.

The opposition People’s Democratic Party (PDP) candidate is, like Buhari, a northerner – but analysts say his business background, in port logistics among other ventures, has won him supporters among the southern business elite.

“I will be proactive in attracting investment and supporting the 50 million small and medium scale enterprises across Nigeria for the purpose of doubling the size of our GDP to $900 billion by 2025,” Abubakar said in a video message.

“These investments will create a minimum of 2.5 million jobs annually and lift at least 50 million people from poverty in the first two years,” he added.

In the manifesto, Abubakar said he would privatise government-owned crude refineries, issue new licenses for greenfield investments in refineries and consider re-introducing bidding rounds for marginal fields and oil blocks.

The plan, the manifesto said, would make sure Nigeria refined half its current crude output of roughly 2 million barrels per day by 2020.

OIL
Nigeria remains largely dependent on sales of oil, which make up roughly two-thirds of government revenues. But it refines almost none of its crude, instead exporting what it produces and paying to import refined products – a large drain on the country’s wealth.

Abubakar said he would eliminate subsidies on imported fuel and let the market determine the price, a potentially risky strategy in a country where even rumours of price hikes have triggered violence.

He said he would sign the African Continental Free Trade Agreement. Buhari has up to now kept out of the continent-wide pact, saying he wants to carry out wider consultations.

Buhari’s government has tried to keep tight control of exchange rates as the naira weakened in the face of global oil price declines.

Abubakar’s manifesto said the exchange rate controls were an issue. But it stopped short of saying whether he would end them.

Buhari – who in 2015 became the first opposition candidate to oust a president through the ballot box – has promised to keep up his campaign against corruption.

(Reporting by Alexis Akwagyiram in Lagos and Paul Carsten in Abuja; Editing by John Stonestreet and Andrew Heavens)