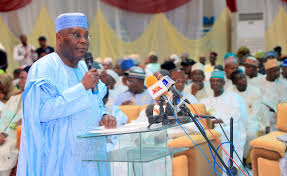 The Peoples Democratic Party (PDP) Presidential Candidate, Alhaji Atiku Abubakar will on Monday, January 14 storm Ekiti State with other leaders of the party in continuation of his campaign tour across the country.

Director of Media and Publicity of the Atiku/Obi PDP Campaign Council in Ekiti State, Lere Olayinka said in a statement issued in Ado Ekiti on Saturday, that the presidential campaign train will have a stopover at Ikere-Ekiti before moving to Ado Ekiti, the State capital where homage will be paid to traditional rulers at the palace of the Ewi of

Ado Ekiti, Oba Rufus Adejugbe.
Olayinka, who said further that members and supporters of the PDP are expected at the State Pavilion, NTA Road in Ado Ekiti, venue of the rally from 9am added that the campaign train will also stop in Akure, Ondo State on Monday, move to Osun State on Tuesday, Lagos State on 17 and Ogun State on 19.

He said the rally was billed for the Oluyemi Kayode Stadium, Ado Ekiti, situated at the center of the State capital but the State Government declined only to approve the use of the State Pavilion, located at the outskirt of the town.

Olayinka urged the people of the State to troope out en-masse to give rousing welcome to the PDP presidential candidate, who he declared as the “next president of Nigeria by the grace of God.”

On the parallel campaign council inaugurated by the Senate Minority Leader, Biodun Olujimi, Olayinka said; “That one goes to no issue. The campaign council at the national level is relating with the Chairman, Prof Kolapo Olusola and the Director General, Chief Dipo Anisulowo.

He said “the stand of the party as well as the campaign council, which Senator Olujimi must abide with is that those in the House of Assembly, who are still claiming to be PDP members but working against the party by being instrumental to the suspension of 12 assembly members as well as the sack of elected council chairmen and councilors who are members of the party will not be accorded recognition.”

Graduate Arrested For Robbery In Ogun

17 thoughts on “Atiku takes campaign to Ekiti, Ondo on Monday”