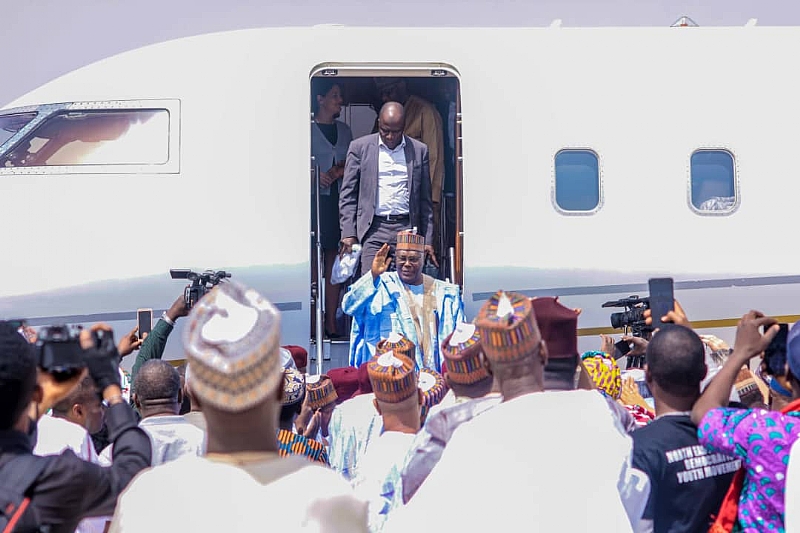 As the 2019 general electtions is fast approachng and electioneering campaigns heat up for coming to an end in barely a week, the presidential candidate of the Peoples Democratic Party (PDP), former Vice President Atiku Abubakar stomed Maiduguri for his electioneering campaign çalling on people to dump APC and vote President Muhammadu Buhari out of office in next week’s general elections.

He said PDP was asking Nigerians to vote out President Buhari and the APC because they have failed Nigerians.

The PDP Presidential candidate was earlier in the morning in Damaturu, the Yobe State capital, before attending the same PDP campaign rally in Maiduguri late around 5 pm at the Ramat Square Maiduguri where the PDP supporters converged for the rally .

As the former Vice President and his campaign team ealier arrived at the Maiduguri International airport at about 11 a.m before moving to Damaturu, Yobe State by road, returned to Maiduguri and arrived at the venue of the rally around 5 p.m.

Addressing the mammoth crowd at the Ramat square, the former vice president expressed joy for the warm reception and solidarity beyond his expectations.

“I thank you all for this great show of love and support,” Abubakar said, in Hausa. What I see here is a clear testimony that Borno is indeed the home of the PDP and you people here have clearly demonstrated your readiness to vote out the other party.

“The entire Nigerians have agreed that it is the turn of Northeast to produce the next president of the country. And if you, the people of Borno, key into this agreement and vote PDP I will make some key promises to you all here. Which by the grace of God I must fulfil.

“My first promise to you is that we will ensure that peace returns to the Northeast Nigeria and the country at large. Everyone that knows me can testify that I am not a person that engages in triviality and I am not a coward.

“After the return of peace, I will ensure that everyone who is displaced will return to his or her local government area while we provide them with businesses to pick up the pieces of their lives. We will reopen schools, markets, and hospitals.

“The United Nations has said it long ago that the Northeast of Nigeria is the poorest of all places in the world. And by the time we assume office we shall bring to end poverty in this region. We are going to do this by investing in our agriculture, in small and medium scale entrepreneur and empower our youth.

“APC has betrayed the trust of Nigerians and they deserve not to be re-elected”, Atiku said.

The former Vice President however called on security agencies to stay away from politics and concentrate on protecting the people of the country, as mandated by the law.

Earlier, the National Chairman, PDP, Chief Uche Secondus commended the party members and supporters for coming out enmasse to welcome them

He said, “Now we know Borno is truly a PDP state and we congratulate the people of Borno for the show of courage and solidarity for all our candidates, especially the PDP flag bearer, Dr Atiku Abubakar.

“But Nigerians will reject them because they cannot be allowed to rig this election. Any rigged election will be rejected by Nigerians because the vote is for PDP,” Uche said.

He further called on the APC-led federal government not to politicise Nigeria’s security. He alleged that the ruling party is planning to win the election using security operatives.

“APC leadership is not the Inspector General of police and it cannot be allowed to be posting police officers of their choice. You are not the IG.

” The APC leadership cannot interfere in the posting of police commissioners and military officers.

“You must (not) destroy our country and our democracy. Exhaust your remaining time and allow the man, Atiku Abubakar to come and restore our economy and our security,” Uche said.

The PDP National Chairman presented flag of the party to the governorship Candidate in Borno State, Hon. Muhammed Alkali Imam.

Atiku was accompanied by the Governor of Gombe State, Ibrahim Dankwambo; Senator Abdullahi Ningi from Bauchi State and Buba Galadima, the Spokesman of Atiku Abubakar campaign organisation among others