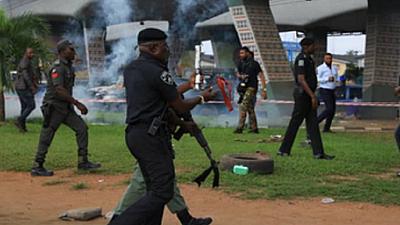 The prominent civil Rights advocacy group – HUMAN RIGHTS WRITERS ASSOCIATION OF NIGERIA (HURIWA) has condemned as primitive and brutish the armed police attacks of unarmed civilian protesters in Lagos this morning. HURIWA has demanded the immediate release of all those arrested at the Lagos protests.

It has vowed to drag the police boss to International Criminal Court in The Hague Netherlands for prosecution over crimes against humanity.

Describing the police and armed security forces’ oppressive actions against civilian protesters in Lagos as an attack on the soul of democracy, the Rights group said the action of the armed security forces was provocative even as that could precipitate mass participation of other citizens who were not part of the protest in the first instance. HURIWA regretted that the main labour unions such as Nigerian Labour Congress and Traze Union Congress have all been bought over by the APC administration of President Muhammadu Buhari.

Also, HURIWA said it will immediately petition the international community through the offices of the presidents of United States of America; France; Premier of U.K.; Chancellor of Germany and prime minster of Australia to demand that Nigeria under an emerging dictatorship is compelled to adhere strictly to all binding international legal provisions that guarantee fundamental freedoms for Nigerians which it subscribed to under several United Nations treaties and the African charter on human and people’s rights.

HURIWA reminds president Muhammadu Buhari that the rights to peaceful assembly and association are one of the fundamental freedoms legally guaranteed under international human rights law, namely under Article 20 of the Universal Declaration of Human Rights (UDHR), under Article 21 and 22 of the International Covenant on Civil and Political Rights (ICCPR), and Article 15 of the Convention on the Rights of the Child.

HURIWA stated that going by available body of international legal knowledge, these international instruments have been accepted by the Nigerian state, and they are also part of the Nigeria’s national law under chapter 4 of the 1999 Nigerian Constitution and by a plethora of legal authorities and decided cases.

“According to Article 5(1) of the United Nations Declaration on Human Rights Defenders, which has the purpose of promoting and protecting human rights and fundamental freedoms, everyone has the right, individually and in association with others, at the national and international levels to meet or assemble peacefully.”

HURIWA recalled that Peaceful assembly is a broad term covering all types of gatherings, including peaceful demonstrations. The general rule under Article 21 of the ICCPR is that any restriction placed on such freedom shall be prohibited, unless it is provided by law, subjected to a strict test of necessity in a democratic society, and imposed only in the interests of national security or public safety, public order, the protection of health and public morals, or of the rights and freedoms of others.

HURIWA wondered why the National Assembly has gone dangerously to bed whilst armed security forces on the illegal orders of Nigeria’s emerging maximum ruler have started gunning down peaceful protesters.

22 thoughts on “Attack on protesters is attack on the soul of democracy: – says HURIWA:”