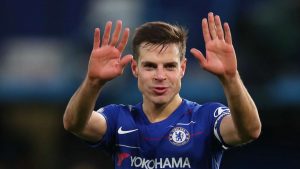 Cesar Azpilicueta said Chelsea should have won by a greater margin at Malmo after only securing a 2-1 victory in the first leg of their last-32 Europa League tie.

Goals from Ross Barkley and Olivier Giroud put Maurizio Sarri’s side on track to end a run of four consecutive away defeats in all competitions without scoring.

But Mateo Kovacic’s error let in Anders Christiansen to score a late reply for the Swedish side that leaves work to do for the Blues in next week’s return leg.

Chelsea showed a vast improvement from their 6-0 humiliation at Manchester City in the Premier League on Sunday, but Azpilicueta complained about the lack of a clean sheet from their trip to Swedbank Stadion.

“It was a tough defeat last Sunday, but we are in the knockout stage and it’s important to start well,” Chelsea’s captain told BT Sport .

“We had chances to have a more comfortable result, but they scored and there is still a lot to play for next week.

“In the second half we had whole control of the game and had a lot of chances. It’s frustrating to concede a goal and not to have a better result. It’s still all to play for.

“This tournament is very important, we are fighting for trophies and to be in the top four. We are in the EFL Cup final [against City] next week, every trophy is important.”

Chelsea return to action on Monday when they host Manchester United in the fifth round of the FA Cup .

Why I Rejected Joshua Rematch – Klitschko