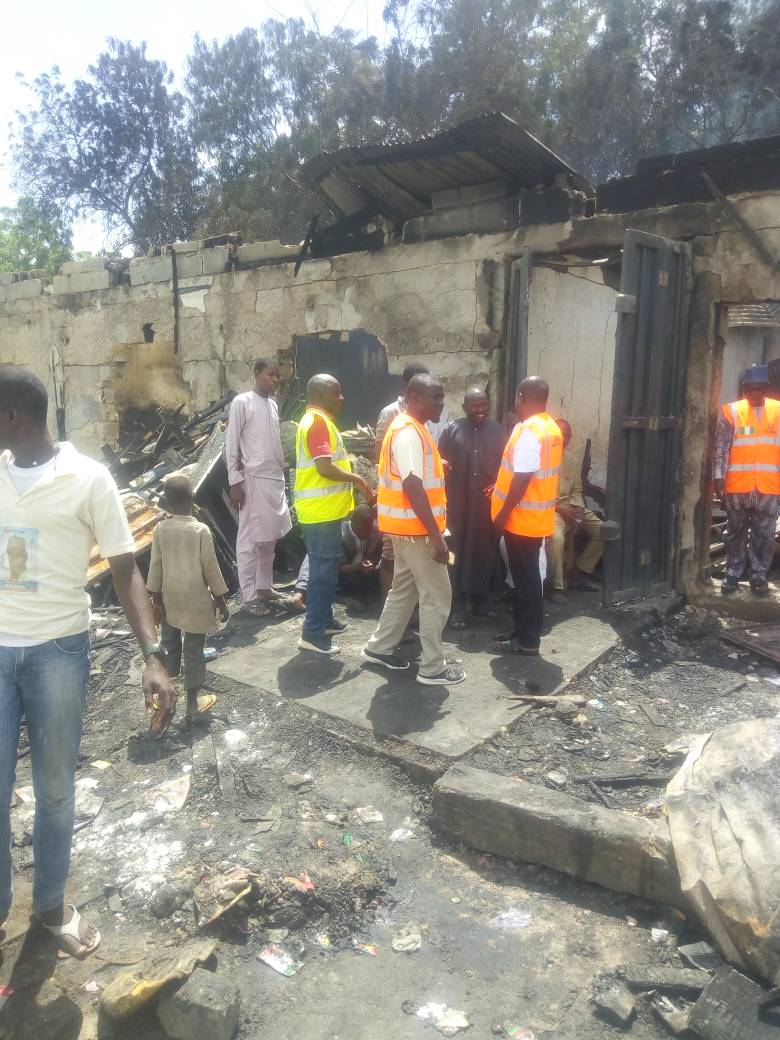 Maiduguri city was on Sunday night thrown into another tragedy when the famous international market in the city popularly known as the Baga Road Fish Market was engulfed by fire which claimed about 20 shops.But for the quick response and intervention of the Borno State Fire fighters that rushed to the scene of the inferno, that prevented the fire from consuming the entire market.

However, the fire was said to have destroyed goods and property worth hundreds of millions of naira. The raging fire lasted for over 3 hours before it was brought under control by the locals, sympathisers and fire fighter that who arrivedwith their equiped fire trucks.

The incident was confirmed by police, NEMA, MMC and SEMA authorities. The spokesperson of the National Emergency Management Agency (NEMA), North-East, Maiduguri, Abdulkadir Ibrahim disclosed that no life was lost in the incident. “Fire engulfed Baga Road Fish market, Maiduguri around 8.40pm on Sunday evening. “Response agencies, especially fire fighters and rescue workers responded promptly to the scene to prevent the fire from spreading to other places. “No life was lost even though properties worth millions of Naira was destroyed,” he concluded. ” The fire incident may have been triggered by faulty electrical appliances rand not terrorist bomb. “Traders have closed for the day when the incident occured.

The Maiduguri Metropolitan Council (MMC) LGC Secretary, Hajiya Ya Shuwa Gazali led other top local government Council officials to the scene to assess the extent of the damage and sympathize with the victims of the inferno.

She assured the victims of the inferno that the council will set up a committee to investigate the cause of the fire incident and assist the victims.

Supervisor of the market, Malam Basha Abdullahi told the team during the sympathy visit that about 19 shops and few sheds was burnt down to ashes. He suggested that the fire may have originated from one of the shops. No human life was lost but property worth hundreds of millions of naira was destroyed.

Abatcha Masu , a shop owner in the market and one of the lucky ones stated that the fire did not get to his own shop therefore grateful to God Almighty

“We hope the state government will come to assist those affected to enable them have some thing and to continue their businesses”, Abatcha said.

” If not for the fire fighters, the inferno could have destroyed more shops and stores as the fire was just raging before the fire service intervention”, Madu said.

Adam Shuwa Marte, a shop owner at the market said, ” when the news reached us, we were at home at Bolori. And we thought that the fire has claimed everywhere including our shops but fortunately for us, the fire did not touch our place.”

” Our shops are on the other side of the market but we got confused and panicked when we heard of the fire and also saw the flames and smoke. It was terrible and scary.

“But we are grateful that the fire service fighters at last came to our rescue and rescued other shops and stores from the fire. We pray that government will assist on the incident. Because all the shop owners affected lost everything they all loss both money and goods.,” Marte said.

BOSHA member representing MMC, Alhaji Abubakar Tijani has pledged to contact the state government to look into the matter with a view to assist the victims.

The house member stated this at the scene of the fire when he visited the market to sympathize with the victims and assess the extent of the damage.

The Executive Chairman, SEMA, Hajiya Yabawa Kolo also sympathized with the victims of the Baga road fire disaster and said that the state government will definitely do something about it as plans are under way to assist the victims and install measures to avoid future occurrence.

She however solicited for calm, understanding and patience as government is looking at the matter with a view to assist.

Earlier, the Police authorities in the state said that only 8 shops was destroyed iand no life was lost while the situation was already under control.