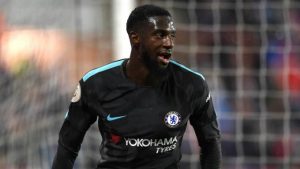 Tiemoue Bakayoko has arrived for his AC Milan medical ahead of his proposed move from Chelsea.

The 23-year-old attended the Rossoneri’s La Madonnina clinic on Monday and is expected to sign a contract with the club once the checks are completed.

The France international will reportedly join on a season-long loan deal, with Milan retaining the option to sign him permanently in 2019 for a fee of €35million.

Bakayoko signed for Chelsea from Monaco last July in a deal worth in the region of €45m, but he struggled badly in his first season in the Premier League.

He made 24 starts in the top flight but only nine of those came after the turn of the year, with the last of his three goals for the club coming against Huddersfield Town in December.

With Jorginho and Mateo Kovacic arriving in the transfer window, Bakayoko has been deemed surplus to requirements by new head coach Maurizio Sarri, and he was not in the squad for the 3-0 win at Huddersfield last Saturday.

However, David Luiz appears more likely to stay at Stamford Bridge after Sarri backed him to play an important role this term.

“I don’t know about what happened in the past but now he has a good chance,” Sarri said of the Brazil defender. “We only have to carry on like we are doing now with him.”

Joy Of Four For Cristiano Ronaldo

Should Divers Be Banned? The Soccer Saturday Panel Discuss