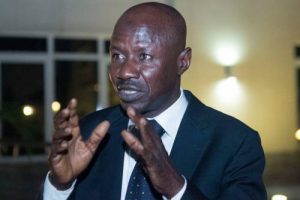 The Economic and Financial Crimes Commission has arrested the Managing Director of Platinum Multi-purpose Cooperative Society Limited, Mr. Michael Osasogie Obasuyi, for alleged conspiracy, cybercrime and laundering of N 11.498 billion According to EFCC, Mr. Obasuyi, who is also the Managing Director of Smartmicro Systems Ltd, had written a petition in March 2018 to the commission against a mobile and electronic payment provider firm.

The anti-graft agency said in a dramatic twist, the petitioned company had also written a counter-petition against Smartmicro and Obasuyi, leading the commission to begin investigations into the activities of Obasuyi.

EFCC operatives Smartmicro was alleged to have approached the company in 2012 for the deployment of bulk purchase solution called a�?Corporatepaya�? to facilitate payment of salaries of Delta State employees in microfinance banks. It was also alleged that the company configured an additional outbound fund transfer solution called a�?Fundgatea�? in 2017, which required Smartmicro to maintain a pre-funded settlement account with a first generation bank for settlement of account it had initiated. The company further alleged that the bank, sometime in March 2018, revealed that the settlement account was in debit of N11, 498,944,038.29. Obasuyi, in his statement to the Commission, confessed to have committed the crime, stating that he created fraudulent and imaginary monies through the aid of a�?Fundgatea�? financial application from the company.

A statement signed by the Spokesman for the EFCC, Mr. Wilson Uwujaren, said, a�?The commission, in the course of investigation recovered a paper version of the programme called MicroSwitchServer1, which he allegedly used to create and post the imaginary monies. a�?He also admitted to have diverted to his personal use N7, 519, 381, 202 out of N11, 498,944,038.29. a�?The Commission has so far recovered N2, 903,727,563.92, $37, 992.87 and 18,538.09 found in Obasuyi’s accounts in various banks in the country. a�?Also, a total of 20 properties located in various parts of Edo, Rivers and Lagos States and Abuja, worth several millions of Naira, have been traced to Obasuyi, which were acquired with proceeds of crime.

a�?Obasuyi, who also admitted to have purchased 134 buses from the proceeds of crime, runs the popular Platinum Cruise Transport Company. He will soon be charged to court as soon as investigations are concluded.