Barcelona 3-0 Liverpool: ‘I don’t know how Messi always delivers, but he does’

Barcelona 3-0 Liverpool: ‘I don’t know how Messi always delivers, but he does’ 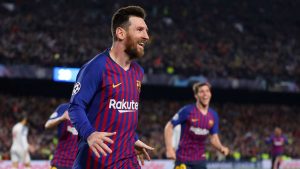 The Argentinea��s magic still surprises the Barcelona boss, who says he cana��t understand how his star always comes good in big moments

Barcelona  boss Ernesto Valverde still gets surprised by Lionel Messi and said the star instilled fear in opponents after starring against  Liverpool .

Messi scored a brace after Luis Suareza��s opener as Barca took control of their  Champions League  semi-final by winning the first leg 3-0 at Camp Nou on Wednesday.

The forwarda��s second was a tremendous 30-yard free-kick which brought up his 600th goal for the  La Liga  giants.

Valverde said he was unsure how Messi continually delivered for Barcelona and the 31-year-old is still surprising the head coach.

a�?I just saw it [the free-kick] at pitch level, but the truth is, Leoa��s always surprising,a�? he told a news conference.

a�?It was very far out, we didna��t know what he was going to do. In the end, I dona��t know how he does it, but he always does.

a�?Ia��d rather not think how he does it, to be honest, but he always shows up when we need him the most, this time just when we were in situations in which we had to shake Liverpoola��s domination off.

a�?Through the way he plays and the way he gets close to their goal, he helped us play and win by a bigger margin a�� and he instills fear into our opponents.a�?

Messi became Barcelona’s all-time leading scorer with a hat-trick against Granada in 2012, moving him ahead of Cesar Rodriguez who last scored for the club in 1954.

He now sits 368 goals clear of Rodriguez, who is still the club’s second-leading scorer, while team-mate Luis Suarez sits fifth on the club’s all-time list with 177 strikes to his name.

Sarri: Hudson-Odoi and Ampadu can be like new signings

380 thoughts on “Barcelona 3-0 Liverpool: ‘I don’t know how Messi always delivers, but he does’”