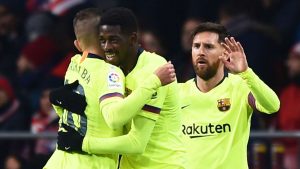 Ernesto Valverde praised the understanding between Lionel Messi and Ousmane Dembele after the pair helped  Barcelona  overcome  Ajax  in the  Champions League .

Messi became the most prolific goalscorer for a single club in the competition  as he scored one and assisted the other in a 2-1 victory that confirmed Barca as Group B winners.

The skipper’s opener was a moment of inspiration in the penalty box, weaving away from multiple markers to manufacture space for a predatory finish past Jeroen Zoet, making it a record 106 Champions League goals for the  Argentina forward.

Young winger Dembele supplied the pass in the build-up in a continuation of his recent renaissance.

Goal reported earlier this week that  Dembele has asked Barcelona to allow him to leave the club in the January , but the 21-year-old was on target in the weekend draw with  Atletico Madrid  and impressed in Eindhoven.

“I’m not entirely sure how Messi scored that goal,” said Valverde.

“But he and Dembele combined really well down the right. Between them you could count on them producing a shot on goal from almost any situation.

“My team created lots of dangerous chances too, but it was a game which was too open.”

Barca were thankful to Messi for stirring them after a below-par hour of play in which they could have been punished by the hosts.

He delivered the free-kick from which Gerard Pique doubled the advantage, ensuring Luuk de Jong’s late header proved only a consolation.

“We had problems in the first 20 minutes,” admitted Valverde.

“There are certain moments in which you have to know how to suffer. They were encouraged and it was a difficult match, but we secured first in the group. We’re happy.”